As you all probably know by now I am holding the Blog Book Awards! In the first round there were no nominations so you could pick whoever you wanted(as long as it fitted in with the category). For the second round I decided that all your nominations would go 'HEAD 2 HEAD' in the final battle for the crown(This reminds me of The Hunger Games) Voting has been open for just over a week after I extended the time but there are only 3 days left to vote in round 2! Here are your nominations:

The winner for the best male author has already been chosen as there was only 1 vote. He will be revealed with the rest of the winners.

You can only vote for 1 in each category and you can do this by commenting below! I have now got an official button for the awards! 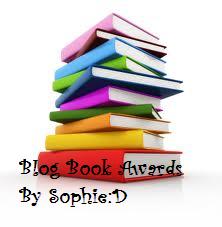 What do you think? I have only just found out how to make buttons and I feel proud! Anyway, as soon as the Blog Book Awards are over there will be a NEW competition along with(once I've finished it) my review of 'Shine' by Kate Maryon-which I'm really enjoying so far because after reading such an exhilarating, thought provoking book as The Hunger Games this book is great to just sit back, relax and read. Also, I love the idea behind this great storyline
Keep Day Dreaming, Sophie:D
Posted by Unknown at 5:17 pm