Today, I'm participating on my first blog tour. It's my stop on the Geek Girl Blog Tour.
Congratulations on Geek Girl! What gave you the inspiration for this novel? 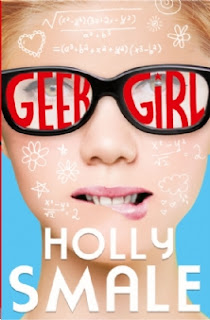 Thank you! I was writing a very serious novel for adults when a good friend suggested I have a bash at a book about modelling, because I did it as a teenager. I didn’t want to, frankly, but she nagged me until I agreed to give it a shot, and as soon as I wrote “My name is Harriet Manners and I am a geek,” I realised that it wasn’t a story about models at all. It was about geeks and outsiders - it was about the people who don’t fit in - and that was a story I was suddenly passionate about telling.
Could you give us a quick synopsis?
Geek Girl is essentially an updated fairytale: it’s a modernised version of The Ugly Duckling. Harriet is a fifteen year old geek who is bullied at school, so when she’s spotted by a modelling agency she thinks she’s been given the chance to change her life, or - maybe - herself. Unfortunately her metamorphosis isn’t quite the adventure she was expecting. Not least because the fashion world doesn’t seem to like her any more than her schoolmates did.
Were any parts of this novel based on events in your life or others you know?

I’d call it fictionalised semi-autobiography. I’m not Harriet, but we’re similar; the story didn’t happen to me, but bits of my real life inspired it. I was spotted by a modelling agency when I was fifteen on a school trip, and I was also bullied quite badly at school. Those scenes in particular are very much based on real events. The others are a mish-mash of fiction and truth and reality and imagination, as most books are.
Geek Girl is full of stand-out personalities, were any of the characters inspired by people you knew?


They all stand alone as characters: when I write them, and think about them, they have their own voices and faces and ways of moving and speaking that don’t coincide with anyone in real life. Some of them have characteristics plucked and tweaked from people I know or have met; some of them are secret parts of me I don’t acknowledge very often. A couple are more real, though. Richard is quite recognisably my dad. He thinks he’s famous now.

Geek Girl is full of stand-out personalities, were any of the characters inspired by people you knew?


They all stand alone as characters: when I write them, and think about them, they have their own voices and faces and ways of moving and speaking that don’t coincide with anyone in real life. Some of them have characteristics plucked and tweaked from people I know or have met; some of them are secret parts of me I don’t acknowledge very often. A couple are more real, though. Richard is quite recognisably my dad. He thinks he’s famous now.

It was also packed with interesting facts that I have been randomly sharing since. Where did you find them?
All over the place! The internet is a great source for hunting down interesting titbits: I Google and sniff around whenever I see something I think is interesting or funny. I sometimes sit in a library and make notes out of random books too. Or somebody will tell me something, and I’ll immediately jot it down. It's fine if it's a fact, but a lot of my friends have started beginning conversations with “do NOT put this in a novel.”

Did you enjoy writing from Harriet's view? What was your favourite part to write?

I love Harriet, and I get excited every time I get to step into her head again: she is so alive for me.


I enjoyed writing all of Geek Girl, but some bits particularly stand out. I cried when I wrote the main bullying scene - it brought back some painful memories - and Nick is so lovely that any scene with him and Harriet together is fun to write. Overall, though, I’d say the scene with Annabel is my favourite chapter. Without spoiling the book, I think having people who genuinely love you is one of the luckiest things anyone can ask for and it was wonderful to be able to give Harriet that.
Were you ever a Geek?

I am a geek, present tense. It doesn’t go away. You may get more comfortable in your own skin as you get older, but I think the inner geek stays put. I’m just lucky because as I’ve become an adult and found the people I match properly - as I’ve started embracing my differences - my geeky qualities have stopped being flaws and started being strengths instead.


Did you ever get bullied, just like Harriet, because of it?
Yes. I got bullied quite badly, and I was unhappy for the majority of my teens. That’s what really pushed me to write Geek Girl, and when people sometimes criticise it because they think the bullying scenes are “exaggerated” it worries me. They happened, and - more importantly - I witnessed much worse happening to other people. It’s so important that people acknowledge cruelty and bullying going on all around them, even if they’re lucky enough to escape it themselves. Otherwise how can we expect it to ever get better?
Geek Girl has already had a big impact, what do you want to be the message people take away when reading Geek Girl?
I didn’t write Geek Girl to try and make geeks sound cool. I wrote the book to say: be proud of whoever you are. Harriet’s not the only character in the book - there are a range of personality types - and I wasn't trying to say that she was better than any of them. I was just trying to make the point that whoever you are - whatever your sense of humour, or fashion sense, or interests - you should embrace that and be the best, kindest possible version of that person. I’d love it if that was the message readers took away. I’d love it if it gave people more confidence or faith in themselves.
Why did you want to become a writer and when was it you realised it was what you wanted to do?


I wanted to be a writer from the age of about four or five: basically as soon as I realised that books didn’t magically appear out of thin air. I’m a natural outsider, but people fascinate me and I love working out why they do what they do and watching their individual stories unfold. Everything about writing appeals to me: playing with language, creating worlds and people, making readers laugh or cry or feel different. Also, I was an incredibly bossy little girl so it’s the obvious next step: I get to build a universe and then tell it exactly what to do. It’s so much fun.

Have you got any advice for aspiring writers?

Nothing that hasn’t been said by thousands better at it than me. It’s a skill, just like jumping high or making wardrobes, and the more you practice and hone it the better you will be. Words are your tools, and they can never be too sharp: study grammar, punctuation, spelling and vocab until they are second nature. Read, read and read books by people more talented than you will ever be, and then forget what you have read and find your own voice and what you want to say. It’s the same as in life: the biggest strength you have is in being yourself.
Geek Girl by Holly Smale is out on NOW, published by HarperCollins Children's Books, £6.99 (PB).  Also available in e-book formats.
*Thank you to Holly Smale and Harper Collins.*