When I started seeing all the fantastic comments about this book, I went straight to Goodreads to see what this 'Next Hunger Games' was all about. When I saw the gorgeous cover, and read the plotline, I knew I had to buy this. The premise sounds brilliant, I instantly fell in love with the idea of the different Waves, and the opportunity to be introduced to a brand new heroine. 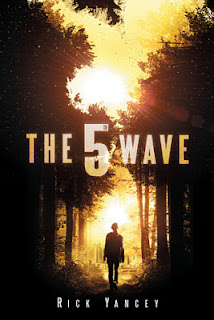 The 1st Wave - Took out half a million people
The 2nd Wave - Put that number to shame
The 3rd Wave - Lasted a little longer,
Twelve weeks...Four billion dead.
In the Fourth Wave, You can't trust people are still people.
And The Fifth Wave?
No one knows
But it's coming.
On a lonely stretch of highway, Cassie runs. Runs from the beings that only look human, who have scattered Earth's last survivors.To stay alone is to stay alive, until she meets Evan Walker. Beguiling and mysterious, Evan may be her only hope.Now Cassie must choose: between trust and despair, between defiance and surrender, between life and death.
The Fifth Wave is an exciting, action packed and engrossing novel that, although it had it's flaws, I couldn't put down. This is set in the present-day, except, we now live in a world where survivors have found theirselves scattered and almost non-existence after an alien race has invaded earth.  Their form of destroying the population comes in Waves. At the time of the book, we are on the dawn of The 5th Wave except, no one knows what is will be, but one thing for sure is that is coming. This novel is fast-paced, perfectly plotted and suspenseful. The world it is set in has detailed descriptions, a well-explored premise through the point of view constantly switching to a different character and is completely engrossing. If the idea of the waves isn't enough to keep you reading, there's the un-flinching heroine in Cassie and the unpredictable shocks that seem to be thrown at you in every chapter.
Cassie - or Cassiopeia - is who you find yourself introduced to do when you first open this novel. Not only is she determined, and a protagonist who's strength must be admired, her main aim is to rescue her brother. The thing that I loved most about Cassie was how thoughtful she was. In a world where seven billion people have already died, you can find it hard to feel compassion, but Cassie brings this back to the  experience for one person. Throughout the novel, I found Cassie's narrative to be my favourite. Rick Yancey's writing is completely refreshing. When you see a man be able to take on a teenage girl's narrative and making it completely realistic, was like taking a breath of fresh air. To get a reader to understand this world is a difficult thing, and I applaud Yancey's attempt. You found out what happened through flashbacks from Cassie, and I loved how she was able to reflect on these. She never continued as if something had never happened, she felt guilt, remorse and sometimes was scared, but every time she was able to get back up. To say this book has it's funny moments is an understatement, It definitely added some light-hearted parts to a serious novel.
The other character's had a wide-spread of personalities and characteristics, but I found I was rooting for them all. The book was switching every few chapters, and I really enjoyed being able to dig deep into this world. From Cassie's brother Sammy, to the boy that she dreamed off, Ben, you get to follow their journey's too. If this book was in first-person, I would have always wanted to find out what is happening in different places. One of the main settings is a training camp called 'Wright-Patterson'. The main action, tension and fast-paced parts happened here, including where the secrets of this apocalypse seemed to unravelled. I adored how much of this world Rick Yancey allows you to grasp, and there were many times in this book when my jaw was left hanging open.
What if you could trust no-one? I spent nights up, thinking about this book. I was always thinking about what had just been revealed to me and I didn't want to leave Cassie. I never wanted to put this book down. Evan Walker is mysterious yet charming and seemingly kind-hearted. I loved their relationship, although I was always hesitant of Evan. He seemed to just appear. He survived so much, but things never match-up with him. Yet, I was rooting for him and Cassie. I was rooting for all the characters and wanted them to succeed. I wanted Cassie to find her brother, and for Zombie to discover the truth, for the villains to lose this war that only ever had one winner.
This is a really enjoyable adventure novel, but at times it is confusing. I say this because, although I liked the switching point of views,  there were no headers to show the viewpoint had changed. There were also quite a few events happening at the same time, and I found myself having to turn back some pages as I seemed to forget what was going on. Although, the writing is brilliant, the proofing was where I found a lot of small, yet frustrating mistakes. This book definitely had a similar style when it comes to the likes of 'The Hunger Games' and 'Divergent', but I would say it is not these books. It's in fact, really different, but I don't doubt for a moment this book will also make it onto the big screen in the year's to come.  I will be definitely re-reading this book very soon, but for now, there is a very long wait for the sequel.
"I really enjoyed this, and think you should definitely add this to your 'to read' shelf. Although, it did have some flaws"
****
Ages 12+
Posted by Unknown at 8:03 pm