Since it's the weekend, I've decided to write a review as I have a few to catch up on. It's also an update just to tell you I haven't decided to stop blogging - it's just a lot of exam stress.
"His lips touched mine and for one split second the whole world stopped. Then every cell of my body fizzed into life" 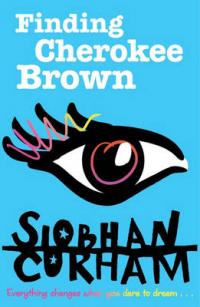 When I decided to write a book about my life I thought I'd have to make loads of stuff up. I mean, who wants to read about someone like me? But as soon as I started writing, the weirdest thing happened. I found out I wasn't who I thought I was and I stopped being scared. And then everything went crazy! Best of all, I discovered that when you finally decided to be brave it's like waving a wand over your life - the most magical things can happen...
Goodreads | Author's Website | Author's Twitter
After reading Siobhan Curham's debut, Dear Dylan, and loving it, I had high-expectations on what to expect from 'Finding Cherokee Brown'. If there is one thing for sure about this novel, it did not disappoint. Finding Cherokee Brown is a fun, quirky and heart-warming novel that when you dig deep down is about finding who you really are and standing up for yourself. The one thing about this novel that stands out is how realistic it is. Every young girl who opens this book will be able to relate to Cherokee and her story.
At the beginning of this story we meet Claire Weeks: a fifteen year-old who has decided to write a book about her life after finding a writing craft book - called 'So you want to write a novel?' on the shelf at her local charity shop. Claire aspires to be one of her favourite heroines, and I think everyone can relate to wanting a part of the fictional heroines we read about. The strength to stand up for what they believe in, and in Claire's case stand up to the bullies who's abuse is endless. Except, when Claire receives a card on her birthday addressed to a young girl called Cherokee, she begins to discover the truth. I loved how Cherokee came about, not all at once but how she was built-up. Yes, she was knocked back down and had hard times but no matter what she did not let it beat her. She was strong, ambitious and at times, feisty but she soon discovers that she may not have to make exciting things happen, when to her surprise, she has the chance to get to know her real dad. Dad - the person she has dreamt about for years but left her and her mum to move to America. Dad, who turns out to be living in a world of rock and roll, and where music plays an important part. Cherokee's narrative is powerful, moving and hilarious. After reading this novel, Cherokee Brown is a worthwhile heroine that deserves to be up there with Katniss Everdeen and Tris Prior.
Not only was the writing fantastic, but at the beginning of the first chapter you would find a 'Notebook Extract' from Agatha Dashwood - the author of 'So, you want to write a novel?'. This was a sneaky way of using foreshadowing to give you a hint of what would go in the next chapter, but also it showed how Cherokee was following the book from when she first found it in the charity shop. I couldn't get enough of the way this novel was set, and how you were able to picture everything so vividly. It's truthful to say Curham never shies away from an opportunity in this book.
Although we get to see Cherokee as a very in-depth character, there are also other characters that share big personalities and who you grow to love. I was rooting on her dad, Steve, and hoping he would stay true to his promises. The outgoing, electric yet loving dad who's life is in his music was joined by Harrison, the quiet yet intriguing eighteen year-old. The time we spent with these characters was also packed with excitement and even the slightest bit of romance put in there too! I found not only did our new favourite heroine grow, so did the other characters. Although, we have to deal with a mum after a perfect family, and a step-dad who works as a life-coach - which becomes frustrating as Claire is just pushed to the sides.
F Every time Tricia - the main bully - went out in search of trouble I let out a sigh. Cherokee only has a limp yet she is anything but normal. The names that she is given are horrible, and even the teacher does not try to stand up for her. I became so connected to Cherokee that I could struggled to read some of it because I knew what was to come. The teachers were one-sided, the parents were too naïve to realise the real problems and all Cherokee could do was sit and listen. The only thing that made it better was the satisfying moment when everything changed.
I really enjoyed this novel. It was everything I wanted and more after Dear Dylan and I will definitely be continuing by reading Curham's next novel. The only thing that I could point out about this novel was the slow beginning but when it picked up, and the volume was turned up, I couldn't put it down. This is the perfect relaxing summer-read every teenage girl should read.
4 Stars - I would definitely turn the page again.
For ages 12+
Posted by Unknown at 10:05 pm