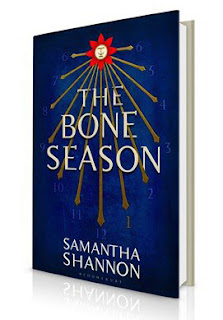 The year is 2059. Nineteen-year-old Paige Mahoney is working in the criminal underworld Scion London, based at Seven Dials, employed by a man named Jaxon Hall. Her job: to scout for information by breaking into people's minds. For Paige is a dreamwalker, a clairvoyant and, in the world of Scion, she commits treason simply by breathing.

It is raining the day her life changes for ever. Attacked, kidnapped and drugged, Paige is transported to Oxford - a city kept secret for two hundred years, controlled by a powerful otherworldly race. Paige is assigned to Warden, a Rephaite creature with dark honey skin and heavy-lidded yellow eyes. He is her master. Her trainer. Her natural enemy. But, f Paige wants to regain her freedom she must allow herself to be nurtured in this prison where she is meant to die.
Goodreads | Twitter | Facebook
There is no doubt that the imagination in this book is incredible. It's detailed, descriptive and highly-ambitious - but it all works. For the most part of the book, I was in awe of the world-building and how it was all woven together. Although, at the beginning it did feel like it was all being thrown at me which made it hard to initially get into.
There is a huge amount happening in this book - along with quite a wide(and definitely varied) cast of characters and clairvoyants. Paige commits treason just by breathing: working in the London Syndicate under another clairvoyant, Jaxon Hall. Her job: to scout for other dreamscapes as a rare type of clairvoyant. Paige was a strong, feisty and fiery female-heroine I was rooting for throughout the whole book and couldn't get enough of reading about. She is definitely one of my top fictional heroines - with a realistic love for coffee despite being clairvoyant. I think in many ways this one idea makes her much more relatable mixed in with her loyalty to the Seven Seals(the seven rare clairvoyants under Jaxon Hall) and the guilt she does feel when she does something wrong.
When Paige reaches Sheol 1, it is discovered that she will be part of Bone Season XX and instead of her name, is now branded as: XX-59-40. A Bone Season is a time where more clairvoyants are brought into the city of Oxford - some after being held in the Tower for up to ten years. Paige is a rare type of Clairvoyant and unlike the others she is chosen as Warden's only-human. At first, Warden resembles an intimidating school-teacher on the first day. He is strict, un-moving and shows no sign of emotion. Although, I definitely grew to love Warden. As we got deeper into the novel and his past was revealed, Shannon keeps you guessing about his motives and actions. He was so complicated but I wanted to learn more about him.
Along with Warden there came his relationship with Nashira, which I found so exciting. It's hard to write this review without giving away too much of the plot: how Paige's relationship with Jaxon works, and her relationship with another voyant called Nick. There are also humans living amongst them - used as slaves to the Rephaim. There is mix of fantasy and dystopia in this novel and creatures like the Rephaim and the Emim are used to build up that element. I loved how far Shannon's imagination could take us: not only building a world that works but creating creatures to threaten it.
One of my favourite parts of this novel are types of 'flashbacks': through these you get to know more about Paige's history and the world she grew up in. The way voyants are hidden away and feared, along with how she dealt with other girls at her school.
When I got into this book there was a lot of action and the tension was built up throughout. I enjoyed it, and the world but I felt this book was too long. There were some thrown-in side-plots that I feel weren't necessary and didn't make much of an impact so, I wished they would have been cut so I could move back to the relationship between Paige and Warden. Their relationship was so intriguing - I couldn't help but love the way it worked(or came to).
Rating - 4 Stars
I really enjoyed this novel but the size was slightly intimidating. The imagination was fantastic though so, this is a book you should definitely give a try.
Posted by Unknown at 1:13 pm