I read this as part of a read-a-long for 'Fandom Freak Out' with Jack and Zoe. It was a lot to just talk about the book and I now have friends to anticipate the sequel with. Also, a big thanks to Siobhan Curham for joining in with our conversations and following the read-a-long! 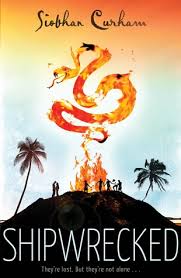 I jump at the sound of a whispered voice over my shoulder. But when I turn around all I see is sand, and the towering, green wall of the rainforest. I guess it must have been the breeze, but I can't help shivering. I have the weirdest feeling that we're being watched.
Grace Delaney and her fellow dance students are en route to perform on a South Pacific cruise-ship when a freak storm hits and they find themselves stranded on a seemingly deserted island.
With the tropical heat rising, passions and tensions swell to breaking point. And the island itself is quietly steaming with a terrible secret...
Goodreads | Twitter | Website
Shipwrecked for me, was like eating my favourite ice-cream. I knew I should stop(as I was participating in a read-a-long of four chapters a day), but I just couldn't put it down. It's was bursting with different flavours of character and the surprises thrown at you resembling the Chocolate Flake they sometimes add!

The concept in Shipwrecked was such a refreshing idea, that was also highly entertaining! From a gripping plot, to laugh-out-loud moments and a heart-thumping romance this is definitely a Saga I will continue to read as the books are released over the next few years. There was betrayal, hidden secrets and mysteries all thrown into a novel packed full of different genres: contemporary, fantasy, romance and adventure.

There was a huge cast of characters in Shipwrecked: dance students you could love and hate alike. Our main protagonist seventeen year-old Grace really does grow throughout the novel and by the end was clearly able to stand up to her at times judgemental peers. Grace was relatable, determined and caring - despite being self-conscious and uncomfortable in her own skin, just like all teenage girls are from time-to-time. I admit, it did take me a few chapters to begin to enjoy her point of view and narrative, especially when she was comparing herself to other girls who her own boyfriend could be interested in. Dance was her escape from a broken-down family and you get the chance to dig-deeper into this.
With so many personalities, you'd think it would be hard to remember them all. But, I found I could remember them with ease: Grace's boyfriend Todd and her 'best-friend' Jenna; the spoilt, Daddy's girl Cariss; The Flea, a light-hearted, fun friend; Belle, who was struggling away from home and was definitely 'outside of the group' and the non-English speaking Cruz. It's hard to talk about his character without giving too much away, but he was so interesting. His whole demeanour, the way his character works with Grace and the slight hints of romance all lead to something bigger. It's true to say the island is home to all emotions as tensions rise. There's blame, anger and betrayal, secrets and romance. It is literally chilling!
At this point in the review, I'm shocked that I haven't commented on Curham's writing style. It was so vivid and imaginative - allowing you to easily picture the scenes with whatever atmosphere the author feels like throwing at you next. Which I loved - as there were always surprises to keep you turning the page. I applaud Curham for the way she handled this novel, being so different from her previous books, I was really impressed!
The few reasons that this book received a four star rating from me because of the problems I had with the romance that is in this novel. Without giving too much away, I thought it all happened too fast and didn't really build-up. It just happened between what I felt were two strangers.
There are still a few weeks of Summer of left so, I suggest you go and get this book as soon as possible! Even on a rainy day, you'll definitely feel the heat!
4 Stars - For ages 13+

You can also enter a giveaway to WIN A SIGNED COPY of 'Shipwrecked' HERE.
Posted by Unknown at 9:58 pm