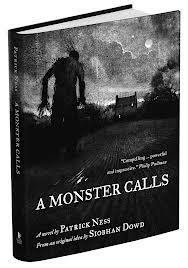 The monster showed up after midnight.
As they do.

But it isn't the monster Conor's been expecting. He's been expecting the one from his nightmare, the one he's had nearly every night since his mother started her treatments, the one with the darkness and the wind and the screaming...
This monster is something different, though. Something ancient, something wild. And it wants the most dangerous thing of all from Conor.
It wants the truth.
Goodreads | Twitter | Website
Patrick Ness is a master story-teller. After reading and loving the first two book in the Chaos Walking trilogy, when I saw A Monster Calls on the shelf at my local library, I instantly picked it up. This novel was the final idea from Siobhan Dowd who sadly passed away after a premature death of Cancer. I only sat down to read the first few pages but less than a day later, I was sitting in my room speechless, tears pouring down my face. This was one of those rare times that I felt numb: where I just sat there for a while to contemplate what I had just read. A Monster Calls is a quick read(215 pages) but one that leaves an impact long after you've put it down.
A Monster Calls captured me from the very first page and held my attention until I turned that final one. To describe the book in three words I would use beautiful and compelling yet tragic. It tackles difficult subjects in a way that is so clever and effective, dealing with grief, loss and finally letting go at the end of a fight. I was, to sum it up, completely spell-bound by this novel.
Conor is such a strong character, and one who forces himself to bury down his own emotions to help his Mother, who is going through another lot of treatment for Cancer. But, Ness didn't write about him so Conor could be heroic, he wrote about him so his actions could reflect what it would be like to have a relative with an illness. Conor forced himself to believe that his Mum would get through, and was scared about admitting the truth of how he felt. He was angry, frustrated, worried. And one of the best characters to read about. For me, he was much more believable than if he was taking it in his stride and showing no emotion.
The Monster who visits Conor was a fantastic element in this story and, you're never told what the truth the Monster is searching for is. He needs Conor to tell him, and this sets out for a powerful scene between the pair. The Monster was to me, a type of metaphor, a type of symbol. At first you find it frightening - what is this Monster and what does it want? But, as the meaning for his part in the book becomes clear you can understand why he came walking. He was responsible for so many plot twists, so smart on Ness' part. I loved them!
The thing that surprised me the most about this novel was how versatile Patrick Ness is as an author. Taking an idea from another author who sadly could not write the tale themselves is a hard task - you want to be able to tell the tale they set out to, but put your own style to it. Ness takes this idea and makes a book that everyone needs to read. Young or old, this novel is all too-real of the type of experience you have when a member of your family is effected by Cancer.
This isn't one to be labelled as just an YA novel, this is a story. And this is the way they should be told. Beautiful, moving and un-putdownable. It's also filled with sinister illustrations that I loved turning the page to look at. Though, some of the lines I felt were a bit cliché at times.
4.5 Stars.
Posted by Unknown at 6:30 pm