"There is a rumour that the Elites don't bleed..."

After I finished this book, I've been itching to start typing up my review. I think it's the fact I don't want to just forget my reading experience! 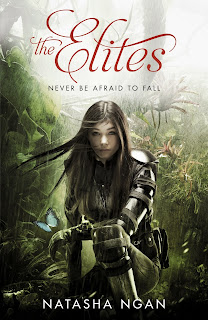 Hundreds of years into the future, wars, riots, resource crises and rising sea levels have destroyed the old civilisations. Only one city has survived: Neo-Babel, a city full of cultures -and racial tension. Fifteen-year-old Silver is an Elite, a citizen of Neo-Babel chosen to guard the city due to her superior DNA. She'd never dream of leaving - but then she fails to prevent the assassination of Neo-Babel's president, setting off a chain of events more shocking and devastating than she could ever imagined. Forced to flee the city  with her best friend Butterfly, Silver will have to fight to find her family, uncover the truth about Neo-Babel - and to survive.
Twitter | Goodreads | Blog
The Elites was such an enjoyable debut from Natasha Ngan and one of the first books for a while where I've really been able to immerse myself in the world, characters and plot-line. Ngan has here a novel that has so many cultural aspects and really makes you feel that you are part of her world - Neo-Babel and, despite being set in the future, it tackles issues that are really rooted in today's society.

The way this novel was told was a highlight of the book for me. The multiple point of views were never confusing or unclear, something I've come across a lot lately, as the characters were so well-developed and really, people that you ended up caring immensely for. The various narratives were all equally strong: with different personalities, ideas and ways of life.  The time taken to develop and understand the characters really paid off: I rooted for them(sometimes - there are a few 'villain' types written in), felt for them and even cried for/with them! I should have counted how many times I was left jaw-dropped at something I had just read, scrambling to re-read the sentence because of the surprises thrown at me.

The characters became favourite fictional friends of mine! They weren't perfect but, had flaws: things that had really taken an effect on their lives. Just like I said previously about the time taken to develop them, each character has a backstory and it's shown how it effects what they do during the novel.  There is an exotic-theme woven into this book, it combines different cultures and makes Neo-Babel come alive. The writing is well-crafted and brilliantly detailed: never losing the main focus of the novel. It allowed me to picture the scenes vividly, and was also interesting to see what would happen in a City made up of different cultures.

While I was reading, this book barely left my hand. I finished within a number of days - which would have been a lot less without the stresses of school. It was captivating, exciting and thought-provoking - and with topics that will stay with you for quite a while after reading.
Personally, I'm so glad this is a stand-a lone as it worked really well. I got to go on this journey with characters I loved but, Ngan was able to tie everything in the closing chapters like a boxed-gift. I was left with no burning questions that would go straight through the book - but had tears brimming in my eyes instead! Finally, I don't need to spend months waiting for a sequel!

The only reason this book didn't get five stars from me is the fact that it takes time for this book to really begin. It's a slightly slow start, with a few strands of it hard to understand, but soon after the President's Assassination you get a fell of what this book will continue to be. This is a brilliant debut and one of the best reading experiences I have had for a while.

I was sent this book in return for an honest review by the lovely people at
Hot Key Books.
Posted by Unknown at 8:14 pm