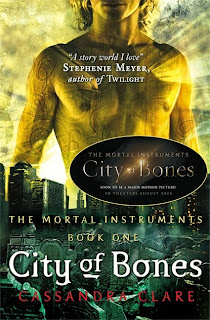 Clary Fray is seeing things: vampires in Brooklyn and werewolves in Manhattan. Irresistibly drawn towards a group of sexy demon hunters, Clary encounters the dark side of New York City - and the dangers of forbidden love.

The Mortal Instruments was a vividly imagined, beautifully written novel that brought half-demons, vampires and warlocks into one tale. Not forgetting Clary's best friend Simon!As much as I wanted this to be one of my favourite novels, a twist-ending that became confusing and a few parts of the novel where the pace dropped let it down.
I loved the world Clare has created in this novel: so imaginative, well thought-out and mesmerising. It was a world full of irresistible half-angel, half-humans, eccentric Warlocks that like to throw parties and where Downworlders walk the streets just out of human gaze. It's was also a place of secrets, suspicion and surprises that will leave you jaw-dropped. It throws at you twists and turns in the plot that sometimes I loved, and other times I had to re-read and struggled to understand. I couldn't help feeling frustrated when this happened but when this plot was at it's best, I found myself slipping away to Brooklyn and the corridors of the Institute.
The characters in this novel were certainly interesting, all having their own traits, style and personality. They were all intriguing, all fiery, feisty or in Jace's case arrogant and left me wanting to know more about their past. I couldn't help wanting to be a part of the sleek and stylish group of Shadowhunters and play a part in their lives.  From the handsome, muscled and confident Jace who answers every question with another question to the un-doubtable geeky who I adored, there's certainly a variety packed into the one novel. The Mortal Instruments also had me laughing constantly with the relationship between the main-men, Simon and Jace and their hatred for one another. Having the thrown in humour was such a great aspect of this novel - and to me, added some more enjoyment in a world that can be quite hard to grasp.
Plot-wise, this was really well plotted and thought-out. Extremely well thought-out. To know where you're taking such a huge plot with so many ideas and to keep readers understanding it is a really hard task. You add some kick-butt action to that, some fiery drama and a romance plot-line and you've nailed it. I loved how every element was in this novel and that you didn't know what to expect. Cassandra Clare, you fooled me: when I thought I could trust someone, I couldn't. And I applaud you for that! This is a type of trick I would love to play on my own readers one day.
I've already said I had a few problems with some twists, that definitely surprised me, but annoyed me at the same type. As I've mentioned before, it's a hard plot to grasp at times and when I finally had it in my hand - I lost it! I couldn't help feel frustrated - and somewhat suspicious.  I have got my suspicions this is to use the chance of a cliff-hanger style ending. But, I feel like I don't understand the plot as well now. Other pet-peeves that made this book one I didn't love, because I really wanted to, was the fact that Clary didn't seem to react to this world she's thrown into. She seems to just accept it. Accept the fact that creatures beyond our reasoning exist. And then trust them enough to live with them, fight beside them, without much of an initial thought. I would have liked to have seen her work through her thoughts and emotions, and try to understand it. Maybe making it more realistic at times but I will definitely be continuing with this series.

For ages 13+ and fans of Urban Fantasy.

Lately, I've been really busy with homework, writing competitions and then there was a problem with my home WIFI. I'm quite behind on reviews at the moment so, this is why I will also be posting my review of 'The Elites' by Natasha Ngan tomorrow even though it will only be a day after this one.

Did you enjoy City of Bones? Are you yet to begin this series? Did it live up to the 'hype'?
Posted by Unknown at 8:05 pm