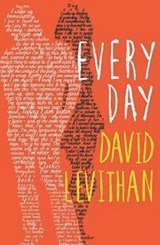 Each morning, A wakes up in a different body. There's never any warning about who it will be, but A is used to that. Never get too attached. Avoid being noticed. Do not interfere. And that's fin - until A wakes up in the body of Justin and meets Justin's girlfriends, Rhiannon. From that moment, the rules by which A has been living no longer apply. Because finally A has found someone he wants to be with - every day...
Goodreads | Twitter | Author Website | Publisher
'Every Day' is the first of David Levithan's books I have read - and I know in the future, I won't hesitate to pick up another. This novel had a fantastic premise, that was completely new and fresh in a world where we see so many ideas again and again. Levithan uses writing that is really packed with wisdom and, mostly life-lessons, to tell A's story; where all the faults in society are there before your eyes. Rhiannon, Justin's girlfriend, was a strong representation of how hard it can be to accept someone a little different from us into our lives. With A switching lives every-day, I slowly felt guilty for judging people because of the way they look or act - because, let's admit it, we have all done this. Levithan though, uses this brilliant concept along with romance and excitement, to create a novel you won't be able to put down.
When reading, I could clearly see A coming across through what is said. Levithan's writing brought him alive in what opinions he had and his actions. There's also the fact that this book was honest and raw - willingly opening your eyes to a very judgemental society we are a part of. Where the author is so smart in this novel is where he used emails to let the characters move their story along. I always like finding things like this in a book; as it's a simple way to let the characters communicate, anywhere. An extra-character we don't expect to make an appearance also uses email, showing that this was though-out and care-fully plotted. I think, at one point or more than that, we had to image ourselves in A's position. No set body, no family, no friends that last more than a day. It's difficult to just think about.
A lived in the bodies of every possible 'type' of person, and in every possible situation you could face in a day. This made the romance aspect a huge part of the novel and, I can't help but say I'm still deciding on what I thought of it. I liked the way Rhiannon could over-look it at times, and when she struggled at others. I loved her vulnerability through it all and how much A cared about her. What I didn't like as much was how it did slip into 'stereotypical territory'
I admit, about one-hundred pages into this novel I did believe it would be one of my favourite books of the year, and the only reason it is not is because it had aspects of, like I said above, the 'stereotypical, 'boy' chasing the girl. Obviously, there are inverted comma's around the 'boy' because A didn't t have a gender. This book should have avoided this - as I enjoyed reading about how A was conflicted about what he should do - only to willingly cause a lot of trouble in other people's lives.
Posted by Unknown at 6:58 pm