I write reviews.
In those reviews, I always comment on the main-characters, and if that's a female, I can't help but slip into calling them 'Strong' or 'Feisty', as if that's a shock. This is a habit of mine, and when describing a book I've read to friends, I always end up saying, "The main character is so strong - you have to read about her!" I admit, I've read about the 'Strong heroine' quite a few times, but why is it that being strong is the main characteristic that makes a female heroine? Can't being clumsy, geeky, and quite frankly every-bit relatable like Harriet Manners from Geek Girl by Holly Smale make the perfect heroine too? I think so. Not only did Harriet inspire young girls to be themselves and not worry about expressing their inner-geek, but she was someone that stood up to bullies by correcting their grammar. That's strength, not the one you would normally associate with that kick-butt female-heroine in your mind, but, it takes a huge amount of courage to embarrass someone by noticing the difference between "Your" and "You're".
After reading a lot of recent discussions on Twitter and on other websites, I've started to wonder what exactly is the definition of a female heroine and whether it's still okay to call a female character 'strong' and 'empowering'. All female book characters are strong, although before the likes of Celaena Sardothien and Katniss Everdeen came-along, everyone seemed to be left with their jaws-dropped if they found a female character that could just stand up for themselves, or a protagonist that was willing to go against what is expected of them. Although, is a book character not seen as strong if they have had to fight through struggles in a family; is that not the same quality that has had to be used to be the leader of a rebellion against your Government(Sorry, Katniss!), and the same as breaking the rules to protect the people you love? 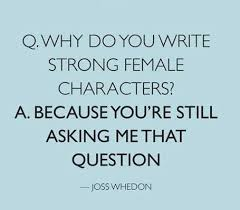 I found this quote whilst looking on Google Images for 'Strong Female Characters' to feature in this post...
The definition of a heroine is very different than it used to be.  I'm welcoming a new-era of female protagonists with my arms open wide and I love seeing that young girls have these people to read about and look up to. When you think about a heroine, admittedly the first things that come to mind  are the words strong and brave. That's a stereotype that we can't change, but the understanding that strength is not just being reckless is something I'd love to see. Then names such as Tris Prior(from Divergent by Veronica Roth) but, Tris wasn't just strong. She felt emotions, regretted decisions, felt guilty. Personally, I feel a heroine is not just somebody that saves the day, but also thinks about the consequences. Other qualities I like to see in a heroine is someone who thinks. The 'Strong' heroine is such a limited explanation, when somehow doing something reckless is strength. Admiration comes with strength; I admired Cassia(from Matched) when she decided she wanted to make her own decisions, and instead of making decisions with no regard for her family, she took time to make her choices.
Of course, there's also the way we still feel the need to point out where a female character has been strong, rather than getting-used to the way that a young girl can go against things that they don't believe it. Admirable, interesting, relatable, unique, powerful - there are other personality traits that can be a surprise than a women being strong.  The word heroine has a lot of definitions, and I doubt everyone has the same definition when they think about it but, why do we feel the need to comment on the fact we've found a strong character?
So, what defies a female heroine?
TOMORROW: Casting the Characters - Matched by Ally Condie
Posted by Unknown at 10:20 pm

Email ThisBlogThis!Share to TwitterShare to FacebookShare to Pinterest
Labels: Discussion