The 'Throne of Glass' series is a favourite of mine, with the detailed-writing and fantastic set of characters. Although, previously I'd only read one of the five prequels, and with a gorgeous cover, I was extremely excited when a book-shaped package arrived, and this was inside. While many people have been wondering what order they should read the series in, now that this collection has been released, I definitely agree that the mystery surrounding Celaena's past is important for the first two books. 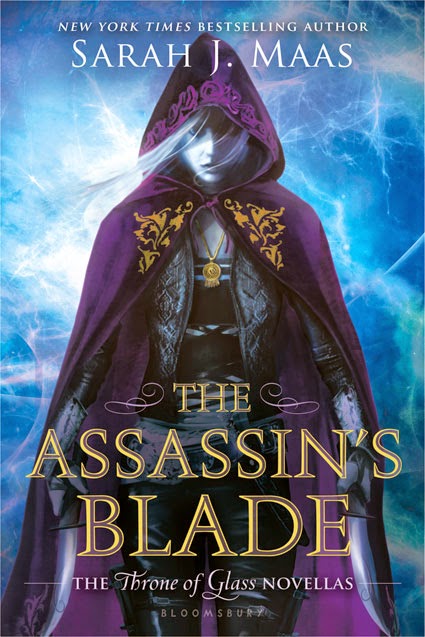 'The twist of a knife,
The birth of a legend...'
The prequels to the 'Throne of Glass' series by Sarah J. Maas.
Celaena Sardothein owes her reputation to Arobynn Hamel. He gave her a home at the Assassins' Guild and taught her the skills she needed to survive.
Arobynn's enemies stretch far and wide - from Adarlan's rooftops and its filthy dens, to remote islands and hostile deserts. Celaena is duty-bound to hunt them down. But, behind her assignments lies a dark truth that will seal her fate - and cut her heart in two forever.
Goodreads | Twitter | Facebook | Publisher
'The Assassin's Blade' is a book fans of Sarah J. Maas will devour like Celaena Sardothien and a new read. In Adarlan Assassin's latest tale, the five 'Throne of Glass' novellas are woven effortlessly into one novel that is both courageous and captivating. Adarlan is a beautifully crafted world that Maas really takes advantage of in this novel, transporting us to Skull's Bay, through barren desserts in search for the Silent Assassin's and then to the Guild - Celaena's 'home'. While the setting of the first two novels is mainly the Glass Castle, along with the streets of Rifthold, this novel allows readers to explore the intricate world. I was completely engrossed as we met the likes of Rolfe(the Pirate Lord), Arobynn Hamel and Sam Cortland(more on him to come).
Maas allows us to see a more humane side of Celaena in these prequels, as she deals with guilt, deceivement and defeat; and also comes face-to-face with death. Despite being as cunning as ever, you see a softer side, the person that doesn't celebrate the blood on her hands, and even stops for a moment to ponder what happens 'next'. As she complains about her split ends, and is determined to keep all of her books, you warm to a character that initially seemed to have a hard, cold demeanour. There's a heart-wrenching romance too, the final-piece of this warped fairy-tale, with villains creeping from page-to-page, a damsel-in-distress(The Assassin and the Healer), and Sam, who is more than just a charming love-interest.
We hear mentions of Sam Cortland throughout 'Throne of Glass' and 'Crown of Midnight', but we get to see the dynamic between Celaena and him in this book. Like most other readers I've been intrigued since the first mention of Sam, and as if we are attached to strings like a puppet, Maas pulls us into their rivalry, their brother/sister relationship that is more than likely to end in a mortuary. Sam is a character with so many layers; the person that creates a sense of hope that the reader believes for a too-short moment. This is not a romance that is thrown in just like the next YA novel you will come across, but instead it's built-up, creating tension and excitement. It's executed brilliantly! I loved it!
With a knife-sharp plot, Maas adds in gripping-action and excitement to complete this fantastic novel. Once again, the author will shatter your heart into fragments of glass, but not before creating twists-and-turns in the book that will leave you jaw-dropped. A new reader, or a fan from the beginning, you need to pick this up! I don't doubt for a moment that we will be seeing some of the characters(especially Arobynn) again - and hopefully Ansel and Yrene.
Favourite novella: The Assassin and the Desert
Favourite new character: I don't think I could choose between Ansel and Sam!

Thank you so much to Bloomsbury for providing me with a free copy of this book in exchange for an honest review!
Rating:
Have you read 'The Assassin's Blade' yet?
If so, do you think the characters in this novel will be making an appearance in future books?
Posted by Unknown at 2:56 pm