Book Review: 'Love Letters to the Dead' by Ava Dellaira

With exams, I haven't had much time to read. In the past month, I've only finished one book, which is why there haven't been that many reviews lately. That one book was Ava Dellaira's debut and, with there being a review from the author of 'The Perks of Being a Wallflower' on the front, I had high expectations. 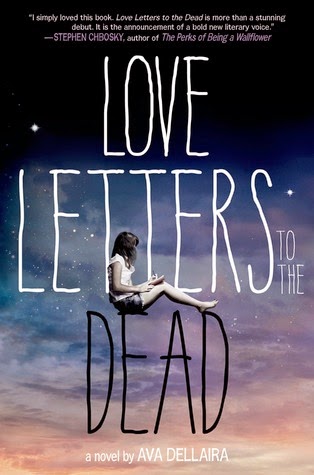 Sometimes the best letters go unanswered.
It begins as an assignment for English class; write a letter to a dead person. Laurel chooses Kurt Cobain - he died young, and so did Laurel's sister May - so maybe he'll understand what Laurel is going through.
Soon, Laurel is writing letters to lots of dead people - Janis Joplin, Heath Ledger, River Phoenix, Amelia Earhart, Amy Winehouse...It's like she can't stop. She writes about her new high school, her new friends, her first love - and her shattered life.
But, the ghosts of Laurel's past can't be contained between the lines of a page forever. She must face up to them - before they consume her.
Goodreads | Website | Twitter | Publisher
'Love Letters to the Dead' is an unflinching novel about grief, guilt and growing up, all told in the format of letters to those we have already lost. Ava Dellaira's debut novel has an idea I continue to feel envious of, with her writing filled with the brutality we come to accept in this world. Laurel's voice was full of anger and, full of her frustration. However, I still found myself feeling disappointed. It fell into the traps that its predecessors have found themselves stuck in before: trying to be the next John Green or Stephen Chbosky. Dellaira's voice is one we need on the literary scene: untamed, unapologetic and unsuspecting. But, her debut just became mediocre.  I can't write this review praising the idea, or applauding her ability to handle a tough-topic - which are great - when I know that this could have been better.

The plot, for the most part, is good. Throughout the novel, there is endless suspense, and as a reader I clung onto this; wanting to know what happened the day Laurel's sister died. Dellaira builds up tension slowly and steadily, making it worthwhile to keep turning the pages until the end. At times, though, I was distracted, desperate to finish this novel so I could read others waiting on my shelf. There are numerous letters where hardly no events take place, and when it came to these, I couldn't immerse myself in this novel. Thankfully, the ending is raw and honest; and this caused tears to form in my eyes. Dellaira left no loose-ends when tying up her plot; those final few pages beautifully written.

Despite the writing being muddled with metaphors on every page, which does become tedious after a while, Dellaira deals with serious topics in her writing, including bereavement. Set during a time when our main character has just arrived at High School, there are also topics that many of us will be able to relate to, with relationships and sexuality included at points in the book. Admittedly, it does feel like young people have been stereotyped when reading; each of us seemingly spending most of our time sneaking out to attend parties, where we drink and take drugs. Serious topics are executed well, and it taught me some clear life-lessons.

In terms of the characters, I did find myself struggling to distinguish between them. Hannah and Natalie, Laurel's new friends, are extremely important in discussing LGBT issues, but I found myself flicking back to descriptions of them. They were really similar, and within a huge cast of characters, their personalities weren't as appreciated as they could have been. Laurel is also difficult to relate to at times, and I found myself questioning her actions, particularly during her first relationship. From what I've heard, the strong subject-matter is making a huge difference to other lives, so maybe this one just wasn't the read for me.

Thank you to Hot Key Books for providing me with a free copy of this novel in exchange for an honest review.

Have you read 'Love Letters to the Dead'?
If so, what were your thoughts?
If not, will you be picking up this book?