Beautiful Creatures by Kami Garcia & Margaret Stohl(Adaptation to be released on the 14th Feb 2013)
Is falling in love the beginning...
or the end?'
'Sixteen moons, sixteen years
Sound of thunder in your ears
Sixteen miles before she nears
Sixteen seeks what sixteen fears' 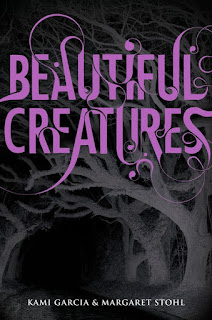 Ethan Wate lives in a small town, Gatlin, in South Carolina. It's a type of town where everyone knows everything about you.With a map up on his wall, that he marks when he reads about a place he wants to visit: a town that Ethan is waiting to leave. But, then Lena Duchannes moves to town. Someone who Ethan instantly knows is the girl from strange dreams he has been having, in each she slips from his fingers and wakes dripping wet and covered in mud. Niece of the town shut-in Old Man Ravenwood everybody has their opinion: a spiral notebook, a number on her hand, a haunting song heard, a window shattered in class. One day in the rain will change everything. Lena is a Caster, not a mortal, and on her sixteenth birthday her powers will be Claimed for either the Light or the Dark. A curse put on her family means that she has no choice. The Claiming will decide her fate for ever. Once Claimed there is no going back. Dark, Light.  Ethan has fallen for Lena, something that will only put him in danger, but somehow he can protect her. Although, suddenly he's realising how much a small town can actually hide. Ethan never saw it coming.
Beautiful Creatures was an exhilarating super-natural read, that captures you from the first page. It was suspenseful, heart-racing and powerful - in a Southern world. This book captivated me into Ethan Wate's life and what I loved about this book was that it was told from a male's perspective. You got to follow Ethan's thoughts and feelings as he discovered the secrets and this girl-Lena Duchannes who has no choice on her fate. I loved Lena's character, who finds herself just wanting to have a choice. She was so fully brought to life: her charm necklace, her spiral notebook, green eyes, black hair all the details were there. I was willing her on.
Full of mystery and dark secrets, it packed all different genres and points into one book: romance, supernatural, fantasy and fiction creating a fantastic read. Beautiful Creatures is perfectly crafted, creating a world that so effortlessly captures the reader. Full of beautifully written visions that kept you on your edge of your seat, a mysterious past was told. I couldn't put this book down! An unforgettable page-turner, with mysterious and dark secrets to uncover in fast-paced plot twists. This novel also combined historical elements and really brought Gatlin to life. It taught me about the Civil War: something that Gatlin is really built on and brings to life Lena and Ethan's history. Beautiful Creatures had so many interesting, unique and gothic characters, both Light and Dark. There were shocking twists and turns in every plot that are un-predictable, with emotional parts of the plot. A mesmerising novel that will keep you up late thinking about it.
Beautiful Creatures was a fantastic super-natural read, that was captivating, heart-racing and powerful. Packed with excitement, suspence, love and love. There are not enough words to describe such a perfectly created world and page-turning novel. A mesmerising book that is a must-read for anyone 12+.
*****
Some of my favourite quotes from this book:
"she made me realize how much I was just like the rest of them, even I wanted to pretend I wasn't"
"Funny thing was, the more she ran, the more determined I was to follow"
"The toe's of our ratty black sneakers touched"
"The monuments of wit survive the monuments of power"
"Question everything. Learn something. Answer nothing."
"If you reveal your secrets to the wind, you should not blame them for revealing them to the trees"
"Three can keep a secret if two of them are dead"
Posted by Unknown at 8:07 pm