'Each tick of the clock brings chaos closer' 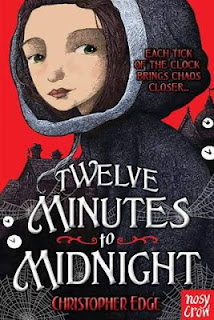 It's 1899 and the new century is now approaching. Penelope Tredwell is the thirteen-year-old owner of The Penny Dreadful, at the most competitive time of Literacy London: magazine stands filled with the creations of H.G. Wells, Arthur Conan Doyle and H. Rider Haggard. Writing under the pen name of Montgomery Flinch, she creates sinister and spine-tingling tales to grip all readers. Always seeking the next venomous plot for her magazine's pages, she is intrigued when Montgomery Flinch receives a letter from Bedlam. Every night at twelve minutes to midnight, the inmates of the notorious hospital for the insane rise, rise from their beds and begin scribbling on any surface they can find. To everyone who reads them, they make no sense but Penny wants to discover the truth. But, what can they mean? Soon she's ensnared in a venomous plot to try and fill the pages of her bestselling magazine. Although, it doesn't take her long to discover that these pieces don't make up a story, it's the future. And the future looks deadly.


Twelve Minutes to Midnight was a page-turning, exciting mystery novel that I couldn't put down. It combined historic elements from the time is was set along with the intense mystery surrounding London's Bedlam. With detailed descriptions, Christopher Edge was able to capture you into this exhilarating plot. This novel, told mainly through the eyes of thirteen-year-old Penelope Dreadful, brought you back in time into one of the strongest literacy times: Literacy London. It was a detailed descriptions of the main places that were in London and are still there today but were also beautiful to read with a rich-gothic style of writing. It became a sinister adventure novel, with a dark and daring plot. It was a book that I wasn't expecting to be one I enjoyed so much. I loved the way it made you feel like you were inside this plot.

Penelope Dreadful was insightful, bold, smart and a female-heroine I loved to read about. Penny was feisty and un-flinching no matter what situations she came up against. A young girl that questions everything but also is so wise that she understands what is going on. The plot Penny was trapped in became a fight for humanity. Being under the pen name of Montgomery Flinch is really a challenge for Penny as all she wants is to be recognised for being able to write these bear-knuckle tales. Although, I found I could relate to Penny through her love for writing but the fact she is a teenage girl. In many points in the novel she is wearing dresses and wants to be involved where she can't. The team that surrounds her are also interesting with different personalities coming into one novel. I loved how their relationships grew throughout the novel and how it was clear that Penny loved them having lost her own parents.

The plot itself was gripping and exciting with unexpected twists and turns filling every chapter. The characters were mysterious in a place where no one can be trusted. There were so many parts of London that were hidden-something much more sinister than what you first think is happening. I found this novel surprising because when I first picked this book up and began reading, I didn't think It would be this good but I loved that it was unsuspecting. Penny was a female character to root for in this spine-tingling adventure! One thing I would point out though is that it is slightly advanced for readers with some words I was finding difficult- for ages 11+

*Thank you to Nosy Crow for providing me with this ARC*

'Twelve Minutes to Midnight was an exciting mystery novel that I was unable to put down. With unexpected plot twists and turns, this novel also had a female-heroine worth rooting for. I really enjoyable novel for ages 11+, with also a rich-gothic style'

Check this book out on - Goodreads