When he took Ebony from me, I knew I would spend my life searching for her. Now I have found her, he will do everything in his power to keep us apart. 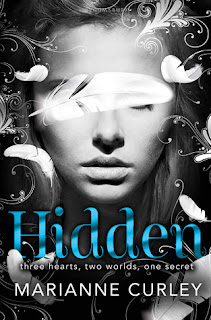 Ebony has led a very sheltered life. Confined to her home in a secluded valley, home-schooled until a year ago and limited to a small circle of close friends. It's as if she's being hidden. But there's one thing that stands out about Ebony: the fact she has violet eyes. She isn't ready when disturbing things start happening to her and something begins to change inside her. On one fateful night, Ebony meets Jordan. It's as if something explodes inside of her and she feels the pain in his eyes. Now her location is no longer a secret, who will find her first?

Wow. Put down this book and try and find the right words to describe it. I challenge you. It was captivating, exciting and gripping-a book worthy of acclaim. From the start, the opening lines are introducing you to Ebony, the main character in this story and who has been 'sheltered' throughout her sixteen years. Ebony is very down to earth, relatable and stubborn but also somebody who is compassionate. I felt I could relate to Ebony in some ways-but she stood out for her violet eyes. ''Hidden' is told from two points of view, as well as from Ebony's perspective, there is Jordan. Jordan has spent his life going home-to-home after his mother died. Jordan is such a determined character, you want to be able to step inside his world. His decisions change everything, and in most cases it's between life and death.

This novel was mainly fantasy but it really combined a bit of everything to create a captivating world. It grabs your attention from the very first sentence and doesn't let your eyes dart from the page until the final sentence has long since been read. The world-building in this novel is perfectly plotted, with intricate detail that gave you a vivid image in your head. The descriptions made the world's in this book realistic and imaginable and the writing was beautiful.

The build up in this novel is packed with suspense as you want to find out 'what' Ebony really is and why she is being hidden away. Every turn of the page allows you to discover something new but what I loved was the connections that were made from Jordan and Ebony's perspective.  Jordan, I found was slightly ahead of Ebony in finding out things you could see would link to her and it built an exciting storyline as we discovered how Ebony would discover these things.

The idea's and imagination was incredible, it was so fully brought alive and created something new. There were parts of this book that pitted 'good' and 'evil' against eachother while other's brought in a gorgeous and un-predictable romance. I couldn't turn the pages fast enough as we went from dreams to daylight and as secrets were discovered. There were demons, angels, princes and mythical creatures that filled the pages that were joined by a cast of characters you will get to know and realise, you don't understand at all. They were interesting, intense and everything you would want. It was a magical, mesmerising read that will lead you to an action-packed finale. Even with all these mysterious characters, there was the reality of a best-friend, a mother and father, and an enemy.

Although I did feel a bit of a Twilight type aspect sneaking in there, it was definitely controlled and made unique. A read I can't fault. For fans of fantasy and romance, and anything else. Just pick up this book and be brought into this new world - *****


Thank you to Bloomsbury for providing me this book in return for an honest review
You can now find me waiting desperately for a sequel.
Posted by Unknown at 10:59 pm