Review: 'The Arrivals' by Melissa Marr 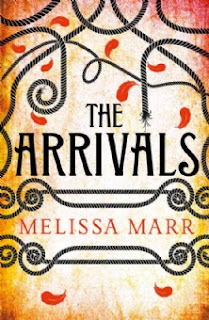 Chloe knew she shouldn't have gone into the bar last night.. Now, in addition to a pounding headache and weak limbs, she's got the guilt of five years sobriety down the drain. When she wakes, she's not in the world she knows. She's in The Wasteland, a world populated by monsters and unfamiliar landscapes, in the company of people just like her, pulled to the Wasteland out of time and place:  for reasons no one knows or understands. Once there, though, their mission is clear: keep the peace, protect eachother and try not to die, because sometimes, after six days of death, you might not wake up.
But things are changing the Wasteland. And for Kitty and Jack, a brother and sister from the Wild West; Edgar, a prohibition bootlegger; Francis, a one-time hippie; Melody, a mentally unbalanced 1950s housewife; and Hector, a former carnival artist, the careful balance they've been keeping for years is about to be upset. All of them, and Chloe, are about to get the answer they've been looking for years: why have they been brought to the Wasteland? And will it be possible for them to get back home?
When I saw I could get this book for review, I jumped at the chance. I have been meaning to read something by Melissa Marr for a while and the premise sounds fantastic. The idea of a Wasteland populated by monsters, a variety of interesting and quirky characters making up The Arrivals and the suspense of why they are there, got me to immediately pick up this book when it arrived. To begin, I was instantly drawn in to this world. Melissa Marr has such a talent for building worlds full of detail, action and brand-new concepts. Getting to know the Wasteland is like navigating a maze: you will get there. In the end. In many ways, it resembles the wild-west but with a punch. This theme brought a western vibe to the book: along with the main protagonists Jack and Kitty being from this time.
There are a lot of characters in this novel, a huge cast of them to be in fact but, I felt some of them weren't as well-explored as the others. Brother and sister, Jack and Kitty along with another trustee Edgar were the most in-depth for me. I loved the fact Kitty was feisty and stood up for feminism in so many ways. Her attitude was outgoing yet, she took on a role of wanting to everything she can to protect those around her. As for Jack, he was loveable in many ways and very driven. These arrivals have all killed, but his determination made me like him. It was the way, despite being in the Wasteland for twenty-six years with his sister, he still felt he has to protect her. Edgar was your usual romantic - and quite edgy. The new girl on the scene, Chloe, was given a back-story which, compared to the other Arrivals, made me sympathetic. She was explored, understood and I got to know the reasons for her choices. Her character was definitely the strongest along with Kitty's. I would have loved to have seen more of Francis and Melody - who, just in the background, intrigued me. I felt the only thing I knew about them was from the blurb.
I did really like the creatures of the Wasteland and the way it was described. The whole aspect of the Wild-West town was captivating and easy to picture: while the creatures had a fantasy element to them. I loved the bloedzuigers and Garuda - whom I could never decide to trust. His personality was so unique - he reminded me of a 'Master' of sorts.
This is an adult book, and I soon found that out. There was a lot of swearing, some which was un-needed and that there were some certain 'scenes' that I had to skip until it was over. The aspect of the romance sometimes over-shadowed the fantastic world-building and the arrivals and, at by the end of the book, I'm still not completely sure of why they were even in The Wasteland. In many ways, I do believe this book would be best suited to older readers. Some of the language could have been easily replaced - but then, would you expect people from the Wild West to speak like we do now? I also would have wanted to see a bit more excitement at the end, where I found myself not getting a descriptive ending.
Rating: 3.5 Stars
Goodreads
Posted by Unknown at 7:15 pm