I can't believe it's already Day 3 of Anti-Bullying Blog Week! I've had so many tweets about yesterday's Guest Post by Andy Robb - where he discussed the un-beatable 'Coke Bottle Theory.' Today, though, I am chatting to Siobhan Curham about her FREE beat-bullying guide, 'Finding Your Inner Cherokee.' I was the first reader of this novel, as well as it being the driving-force for this blog-week, as I wanted to do something more to stop-bullying. Remember to download your copy of the e-book HERE . Find Siobhan on Twitter, Facebook and Dare to Dream.

Before the interview, here's my review, which is featured within the first few pages of the book:
'Finding Your Inner Cherokee is not another one just another one of those beat-bullying guides' instead, it's a breath of fresh air. From the author of Dear Dylan, this novel is filled with interactive exercises in which you help yourself, all of which show how much of a versatile writer Curham is. Read this book because, not only will you know yourself better than you did before but, you will put this down with a new sense of confidence and self-assuredness. This novel will make a difference.'

Finding Your Inner Cherokee is your latest book out TODAY....can you tell us all about it?
I was inspired to write FYIC after my novel Finding Cherokee Brown was published. The novel tells the story of a girl who is being bullied at school and how she finds the courage to stand up to her bullies in her own unique way. After it came out I received several emails from readers saying that it had helped them deal with bullying in their own lives. This made me want to do more. So I decided to write a non-fiction e-book that I could give away for free. I wanted the book to be uplifiting and empowering and full of useful exercises and advice that people who are being bullied - or have been bullied - can apply to their own lives.

Why do you think Finding Cherokee Brown made such an impact on readers? 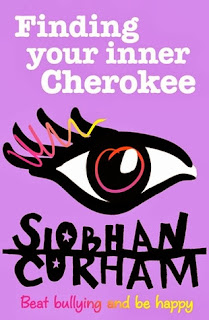 I think that because it's written in the first person readers ended up feeling as if they knew Cherokee and that she was confiding in them. People seemed to really enjoy her feisty voice and watching her come into her own. I really wanted to write a novel that looked at the harsh realities of bullying but was also funny and uplifting. It felt like a massive responsibility as it was so important to me that the book was accurate and didn't gloss over anything. So it was a massive relief when it was so well-received. And it was especially heart-warming getting positive feedback from people who were being bullied.

What made you want to write a self-help guide initially?
I've written a lot of self-help articles in the past - and the first book I ever had published was a self-help guide - and I write a lot of self help blog posts in my role as a life coach, so it's a form of writing that I feel very comfortable with. I've also personally found self help books to be a great source of comfort during tough times in my own life. I know how much they can help and so the notion of writing something really practical that could help people who are being bullied was really appealing to me. I've been personally affected by bullying and I feel so passionately about it that I can't just sit back and do nothing. Almost one half of all young people will be bullied at some point - this figure is totally unacceptable to me. Surely no so-called civilised society should allow this to happen. And it's not just young people either - adults being bullied in the workplace and in relationships is much more commonplace than you might imagine.

I understand you went through bullying - something you will be talking about in my Authors Advice post - but, how did you get through such a tough time?
I was in an abusive relationship when I was in my early twenties. It was one of the worst times of my life and I honestly thought at the time that it would never end and I would never escape. But I did, and I've gone on to live such a happy and fulfilling life. I got through that tough time - and out of it - by working on rebuilding my shattered self-confidence and using my dream of being a writer as a light at the end of the tunnel to focus on. I share all of the ways I did this in detail in the book, so I'm really hoping that my personal example will inspire others to do similar in their own lives.

Now that you have beaten and moved-on from the person who bullied you, can you take any positives away from the experience?
Yes, absolutely, and this is another thing that I focus on in the book, as I think it's really important to focus on the positives rather than staying weighed down by the negatives. One of the biggest positives for me is that, eventually, it made me realise that nobody deserves to be treated in the way I was being treated. I'm so much stronger and wiser now. I think my experiences have made me more compassionate and forgiving - I very quickly made the conscious decision to forgive my ex-boyfriend and move on and I really recommend that to anyone being bullied. Forgiveness doesn't make you weak and it doesn't mean that you're condoning their behaviour. Forgiveness sets you free from a lifetime of anger and bitterness - and that has to be a massive positive.

During your e-Short, you ask readers to write down 'power-tweets' - concluding with them creating their own to help them fight bullying. What is your own personal power-tweet?
'Dare to dream'. I truly believe that everything changes for the better when you dare to dream of a brighter future.

You also talk about your dream-day, something you are living now, how does it feel to live it?
It feels incredible. To have gone from a time in my life when I felt so powerless and alone and so permanently on edge, to be living in a happy, loving home, doing a job that I love and being surrounded by so many people that I love - well, that really is the stuff that dreams are made of. And it proves that anything is possible and that we should never give up hope.

What is the most rewarding thing when writing a self-help guide like this?
Well, writing it in itself felt rewarding in that the whole time I was working on the book, I pictured a young person who was being bullied sitting right in front of me. Everything I wrote, I wrote as if I were having a heartfelt conversation with them. I didn't want the book to read like a text book, I wanted it to feel like a conversation with a close friend. And so, writing in that way felt very rewarding. Also, the positive feedback I've received from the reviewers who have read it already has been amazing. Having someone write that they wished they'd had the book back when they were being bullied really made me well up. Just the thought that you might be able to do something to help is so fulfilling.

What shocks you the most when you listen to the stories of readers that have had to deal with bullying?
I find it really shocking and horrifying when I hear over and over again that bullying is being overlooked by certain schools. This has to change. There has to be some way that schools are held accountable for any bullying that goes on there. It's no good having an 'anti-bullying policy' if it doesn't get properly implemented.

There is a list in the book of celebrities that have been bullied - were you surprised to see certain people there?
Yes and no. On the one hand I think it's really commonplace for people with intelligence and talent to get bullied - so many people bully out of jealousy and inadequacy. When they see someone who is really studious or quirky or creative it pushes their buttons and their instinct is to pick on that person. So I wasn't surprised to see people like Justin Timberlake on the list but I was surprised to see the ex president of the USA, Bill Clinton!

How do you feel when a reader sends you an e-mail, or letter, saying a book of yours have helped them in someway?
It is really hard to put it into words. Often, it makes me cry (happy tears). In the context of bullying, I think it's wonderful. Bullying can be so much about the negative impact of words ie name-calling or threats. It's fantastic to feel that some words that I've written have struck a chord with a complete stranger somewhere and made a positive difference to their lives. That is why I write, really.

Do you have any other self-help books planned?
Yes, I just signed a book deal with Faber & Faber for a non-fiction book called TrueFace. It's for teenage girls and young women and it's all about living your best, most authentic life and being proud of who you are. I'm very excited about it as it's something I feel very passionately about.
Can you share more about your blog - Dare to Dream - with us?
For a long time, I'd wanted to create a little corner of the internet where people could come to be inspired and uplifted and this year I finally made it happen by setting up Dare to Dream. Every week, I write a blog post that will hopefully add value to the reader's life or at least make them smile. I also run workshops and give coaching sessions and talks with a Dare to Dream theme. I absolutely love doing it!
Posted by Unknown at 7:49 pm