There are so many sequels that I am highly anticipating being released over the next few weeks. One of those is 'Broken' - the sequel to 'Hidden' - the second in the 'Avena' series. 'Hidden' was one of the biggest surprises when I read it last year; I fell in love with the switching POVs, the story, and even the cliff-hanger ending(which I am still infuriated with Curley for doing to me). Although, the release of 'Broken' is just a few weeks away, and I've got an exclusive extract to show you today. You can check out the first two at Dark Readers and Bookhi!

By the way, if you haven't read the first book in the series, I suggest looking away now - and going to pick up a copy! If you want to know more about 'Hidden' you can find my review here. 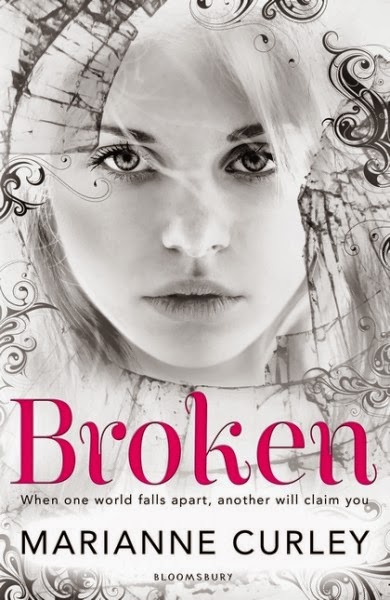 Ebony has always known she's different. But when she discovers her true nature, she doesn't want to believe it.

She is unique. Snatched at birth from her home and hidden on Earth, she knows nothing of the place she cam form. But, her past is coming to claim her and Ebony finds herself increasingly torn between those she loves and her true destiny, as forces pulling her in different directions start to spiral out of control.

Ebony
I hear his footsteps bounding down the corridor before Amber puts her phone away. Running straight over without breaking his stride, he gets down on his haunches in front of me. ‘What happened?’
Amber fills him in. ‘We had a substitute teacher in Physics. Ebony recognised him and she didn’t feel like going in.’
He swings his eyes back to me with a furrowed brow. ‘Who is this dude?’
I take a deep breath. ‘He says he’s my uncle. As in my real, flesh-and-blood uncle.’
‘You’re adopted. How’s that possible? How much does he know about your origins? Does he know you’re an angel?’
Amber shrugs. ‘That depends on whether he’s been lying to Ebony, or not.’
‘Lying about what?’
‘My birth,’ I tell Jordan. ‘Amber and I checked his house out during our last semester break for proof that I was born there – like he’d told me.’
‘So you’ve met him before?’ Jordan asks, looking confused.
‘He came to my house after the fire,’ I explain. ‘It was the first time I could walk through the remains.’
‘I didn’t see him there,’ Amber says.
‘He didn’t stay long. By the time you came back from checking the barn, he was gone.’ I pluck at an invisible thread on Amber’s blazer sleeve as memories of the day of the fire fill my head, how I went searching room by blazing room for Mum and Dad without finding a sign of them.
‘You OK?’ Amber asks, noticing my sudden withdrawal, and my watery eyes.
I nod and remember what I was about to say: ‘I think Mr Zavier might work for Prince Luca.’
Jordan’s eyes open wide. ‘Then he would know your origins. He would know whether you’re human or angel.’
Amber scolds him, ‘But we already know Ebony is an angel. Why would you doubt that?’
'I only meant for certain - that's all.' He looks at me and shrugs his shoulders with a sheepish grin. ‘I’m just saying, you know?’
‘Well, I suppose you’re right, if anyone knows the truth, it would be Mr Zavier,’ I tell him.
‘How sure are you that he’s working for Prince Luca?’
‘I have no tangible evidence, but when we met at my house he said some weird things.’
‘Like what?’ Jordan frowns.
‘He wanted to know which one of my parents “cracked” first. He said it was important that he know whether it was Mum or Dad who admitted they had lied about my birth.’
‘Oh my God,’ Amber exclaims.
‘And he wouldn’t give me a straight answer to any of my questions. But there is something that proves . . .’ I glance at Amber. ‘Well, that I lived in his house when I was little.’
Jordan looks from me to her. ‘What?’
She says, ‘Ever since Ebony was a kid she dreamed of a big white house with shiny floors, fancy paintings, a polished timber staircase, a beautiful piano, that sort of thing. And when she saw Mr Zavier’s mansion, she recognised it as the house from her dreams.’
‘What?’
‘There was one room in particular I remembered more than the others,’ I explain. ‘It had a distinctive mural handpainted across the ceiling. It was always so vivid in my dreams.’
Amber says, ‘I saw the mural too. It was exactly like Ebony described to me loads of times since we were kids.’
Jordan frowns. ‘It looks like you did live in his house once, but that doesn’t prove he works for Prince Luca.’
‘On the night before the fire, my parents told me that sixteen years ago a man named Zavier offered them a baby to raise. He told them his young sister was my biological mother and had died in childbirth two days earlier.’
Jordan gasps, ‘Shit.’
‘Mr Zavier told me he would willingly submit to a blood test to prove he’s telling the truth, and that he would answer my questions when I was ready to know who I am.’
Jordan leans forward and says gently, ‘Ebony, if he’s willing to give DNA, it’s unlikely he’s an angel or working for Prince Luca. In fact, he could be the real thing.’
I nod. ‘I know. If this man is telling the truth, and he is my biological uncle, he’s living proof that I’m not an angel. It would mean Nathaneal has made a mistake. But if Zavier works for Prince Luca he could be lying about everything. Now he’s my teacher and I don’t know what to believe. I can’t go into his class with my head full of so many conflicting images and ideas.’
‘Fair enough,’ Jordan says, then peers at me with an intuitive look. ‘You don’t want him to be your real uncle, do you?’
Once I would have been thrilled to be able to prove that I’m not an angel, but now?
'No. I wouldn't like that at all.'
***
Thank you to the wonderful Sonia at Bloomsbury Australia for providing me with this extract!
What did you think?
Tell me in the comments!
Posted by Unknown at 12:00 am