I originally posted this review on The Guardian.

When I saw this in WHSmith, I knew I had to pick this up, placing it at the top of my TBR pile before reads that have been on my shelf for months.

'There is nothing either good or bad, but thinking makes it so.' 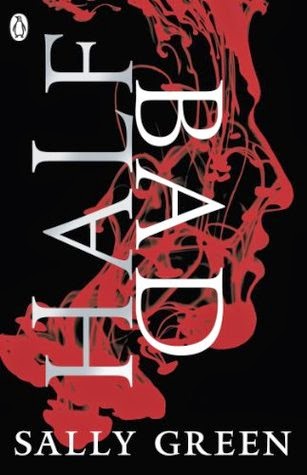 You can't read, can't write, but you heal fast, even for a witch.

You get sick if you stay indoors after dark.

You hate White Witches but you love Annalise, who is one.

You've been kept in a cage since you were fourteen.

All you've got to do is escape and find Mercury, the Black Witch that eats boys.

And do that before your seventeenth birthday.

Sally Green's debut, the first in her Half Life trilogy, is promising; setting out possible plot lines for the sequel, Half Wild, with almost a year until its release. With a unique take on the world of witches - where no broomsticks or cauldrons are included - we experience Assessments, Giving Ceremonies and are introduced to the idea of a council for White Witches in England and Wales. Told using different narrative styles, switching from second person to first, Half Bad is an enjoyable and exciting novel that overcomes the stereotypes that we have come to accept surrounding the supernatural.
Beginning with mixed feelings on this novel, finding the narrative confusing, I contemplated returning to it later rather than continuing this debut. The opening pages are crammed with tension, hints about what could happen in the novel filling the pages, but this is soon lost, Green taking a few chapters to pick up this prose again. The author does execute the second person narrative with ease; a refreshing voice in YA fiction, and I can understand why she has been applauded for this in other raving-reviews. Although, the transitions from the different narrative styles could have been smoother, the plot a struggle to follow for the first part, the timeline becoming slightly blurred as new characters crept into the novel.

Our protagonist - Nathan - is a Half Code, half Black and half White witch. His father is the most powerful Black witch; his mother has committed suicide; his every move is watched by the Council. Half Bad documents his life, as he waits for his Father, and travels with him as he tries to discover what - and who - he is. The novel is, in truth, an in-depth study of his character, depicting his thoughts and feelings, showing the brutality he faces at the hands of Hunters. Nathan is a relatable character, falling in love and struggling to 'fit in' at school, and Green writes him with no restrictions. I loved the cast of characters in Half Bad: the combination of villains and heroes, the inclusion of a damsel-in-distress and a sidekick, along with a homosexual character. They were a distinct set, each described in such detail, the history of Nathan's character in particular thought through by the author.

Once the problems with the narrative were overcome, this soon became an action-packed novel, with some adventure aspects tainting the chapters. The slow and steady novel I became used to picked up its pace, with the suspense building as the ending approached;  particular subplots tied-up in preparation for the sequel, others left after a cliff hanger ending. As a huge fan of fantasy novels, this one was worth continuing!

A rocky-start but a worthwhile read all the same.

Have you read 'Half Bad'?
What did you think?
If not, will you be picking it up?

Tell me in the comments!
Posted by Unknown at 10:59 pm