My Interview with S.C Ransom!

Here is my interview with the lovely S. C Ransom author of the beautifully written Small Blue Thing Trilogy! You can view my review on the first book in the trilogy 'Small Blue Thing' here.  In this interview Sue speaks about her inspirations, where the idea for Small Blue Thing came from and how she created some of my favorite book characters!

Hi Sue, thank you for doing this interview for my blog!

Q. So, when did you first start writing?
A. In February 2009, after reading my daughter's copy of Twilight. I decided to write a story for her and which would reflect her world, not be set in America.

Q. When you started did you ever think you would publish a book?
A. No! I only wrote it for her and had just two copies printed and bound. Never in my wildest dreams did I think it would go this far.

Q. Is there anything you wrote when you first started to write that you would like to get published one day?
A. Actually, everything I've written so far has been published. Between leaving school and 2009 I wrote no fiction whatsoever, so it's not a long list.

Q. Who was/is your inspiration?
A. Ellie, my daughter. Alex in Small Blue Thing is the sort of girl who Ellie might become when she's older.

Q. Where is your favorite place to write?
A. I do most of my writing on the train on my daily commute to and from London. The journey is about an hour each day so that gives me time to write about 1,000 words a day, as long as I don't get distracted by the email or twitter.

Q. What was the best piece advice you've been given when it comes to your writing?
A. Know your reader! Don't try and appeal to everyone, but write something for a particular age group-your friends for example.

Q. Who was your favourite author as a child?
A. I had loads! I used to read all the time. I particularly liked John Wyndham, who wrote science fiction/dystopian book and Helen Dole Boylston, who wrote the Sue Barton nursing series.

Q. What was your favourite book?
A. That's impossible to say as there were so many off them. The Crysalids, by John Wyndham would be up there, along with Watership Down, Little Women, The Wind in the Willows-I could go on...

Q. Is there a book you wished you had created?
A. I think that the plotting in The Time Traveller's Wife is inspired. I'd love to chat to Audrey Niffenegger about how she created it.

Q. What has been your biggest achievement to date?
A. Being a mum - the hardest job in the world to get right, but I think I'm doing OK with my two!

Q. If you weren't writing would you be doing?
A. I only write as a hobby - I have a full time day job as a Life Sciences Head Hunter, finding executives to fill vacancies at some of the big pharmaceutical companies. Writing is much more fun!

Q. What was the first book you published and when was it?
A. Small Blue Thing, in January 2011, exactly two years after I first had the idea of writing for the first time.

Q. Which of your books is your favorite? Why?
A. SBT has a special place in my heart, because it's my first and I didn't expect it to be published.

Q. Which of the characters you've created is your favorite?
A. I just love bad characters! They always have the best dialogue.

Q. I LOVE Small Blue Thing! Where did the idea from the series come from?
A. It was a birthday present for Ellie, so Callum is her idea of a perfect-looking boy(and Callum was her favourite name at the time), and it's set around where she lives and goes to school. If I wasn't sure about anything I'd just ask her what she preferred, so it was easy. The only problem was keeping it all under wraps. She knew I was writing her something, but not what, so sometimes my questions seemed a bit weird!

Q. When did you decide to try and get it published?
A. Only after all Ellie's friends had read it and everyone was suggesting that I try. I spoke to a friend for advice, and she ended up bringing forward her plans to set up Nosy Crow so that she could publish it. I'm very proud that SBT was Nosy Crow's first book.

Q. Why did you decided to set it in London?
A. I wanted to set it in places which Ellie knows, so she would have pictures of something familiar in her head when she was reading it. And I also walked through London everyday so I wrote what I saw.

Q. I'm so happy you did but why was it you decided to write more?
A. I wrote it as a stand-alone but Ellie wanted more. I knew how I could extend it, so when I met Kate at Nosy Crow she asked me to write two more, so I did.

Q. Without giving away any spoilers, have you got any plans for another book in the Small Blue Thing Trilogy?
A. Not at the moment, but people keep asking. I may do something about the other Dirges at some point.

Q. Have you got any projects coming up?
A. I'm writing another book for Nosy Crow at the moment(and should be doing that now really! Don't tell on me will you?. It's due out next summer and it will(I hope) be in the usual bookshops.

Q. What is your latest release?
A. Scattering Like Light(book 3 in the SBT trilogy) was released in January this year. It's available in Waterstones and good independent book stores, and online. (Right now SBT is only 99p if you have a Kindle, but I'm not sure how long this promotion is going to last or if they'll extend it to all the other books).

Q. Have you got any advice for a young girl who wants to become a writer one day?
A. Keep practicing and keep writing. Write about what you see around you and what you know, and ask for and accept feedback. Good Luck! 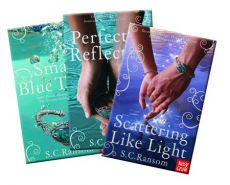 Q. Do you have any pets?
A. Yes, a young chocolate Labrador and two goldfish.

Q. Where in the world would you like to visit?
A. I've been to lot's of places, but there are so many more to see - I can't pick just one.

Q. What is the scariest thing you've done?
A. Parachuting and childbirth(luckily not at the same time!)

Q. If you were stuck on an island what would be the three things you would bring with you?
A. My Swiss Army Knife, a toothbrush, and an unlimited supply of paper/pens.

Q. What is your favourite genre of book and music?
A. I love Crime Fiction, and may write some of that in the future

Q. What is your favorite film adaption of a book?
A. Harry Potter - brilliant!

Q. I really love The Hunger Games! Just wondering If you've read them?
A. I have read them-preferred the first one though.

Q. Team Gale or Team Peeta?
A. I didn't really feel connected to either Peeta or Gale, but would chose Gale if pushed.

And that brings us to the end of my very long list of questions! Thanks so much for the interview it's been an honour!
My pleasure- thank you for asking.

So, a big thank to Sue Ransom for doing this interview! Thanks for answering my very long list of questions and being so honest! If you would like any more information about Sue or her books you can check out her website www.smallbluething.com.