Firstly, I'm sorry for not posting for the past 2 days!  On Thursday I was busy and last night I went to see Now Is Good which was incredible! Here's my review:

'Moments: My life is a series of moments,
Each one a journey to the end.
Let them go' 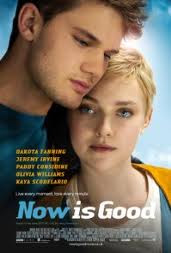 Now Is Good is based on the novel Before I Die by Jenny Downham. 17-year old-Tessa Scott has Lukemia and after deciding to take herself of her chemotherapy, she makes a list of all the things she wants to do before she dies. On her list are things like breaking the law, taking drugs, going on a date and fame-to be remembered, not forgotten when she's gone. Her wish it to try to do as much as she, as fast as she can. As she falls in love, there's a time limit and she hasn't got long to live. Unwilling to be treated like someone who's terminally ill she starts living her life to the full.

Now Is Good was fantastic! It was a tear-jerking film, it was so sad and moving. Also, I found it had some really funny moments during the film and made me laugh. It had a really strong storyline and Dakota Fanning played Brighton teenager Tessa Scott so well. It was very real, set in Brighton and Tessa was a character that you felt for but who was also brave. She sometimes felt scared but tried to put the thought of passing away out of her mind.  The romance was moving because he thought he wouldn't be able to cope with losing Tessa because he had already lost his dad but realises he loves her, he stays by her side even with her illness. In my opinion it hasn't got the recognition it deserves, my film of the year!

It did have some strong language and some scenes that are unsuitable and upsetting for younger people at times so I recommend it for ages 12+. This film is a must see and it makes you realise you should live everyday moment like it's your last.


The Official Song for Now Is Good, I Know you Care by Ellie Goulding.

GO SEE NOW IS GOOD & BRING A BOX OF TISSUES!(Unlike me, who was in floods of tears and sobbing all over my clothes)