'Shoot' I muttered when the paper sliced my finger; I pulled it out to examine the damage. A single drop of blood oozed from the tiny cut. It all happened very quickly then.
"No!" Edward roared...Dazed and disoriented, I looked up from the bright red blood pulsing out of my arm-into the fevered eyes of the six suddenly ravenous vampires. 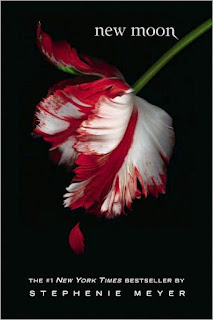 For Isabella Swan Edward Cullen is the one thing more important than life itself to her. Who, she is unconditionally in love with. Edward has already rescued Bella from one dangerous vampire, James, a tracker and as Bella wakes on her 18th Birthday, after a nightmare that shows her as a frail old women with Edward she realizes she will forever be older than Edward. Edward, forever seventeen. Bella is put under danger once again at a birthday party planned by Edward's adopted sister Alice, where she paper cuts her finger, in a room full of six thirsty vampires. It's clear that their daring relationship is more dangerous that Bella could imagine. So, when Edward announces his family is leaving Forks forever, leaving Bella behind she's heartbroken, it's the end of what could have possibly been forever. As her friendship with Jacob grows and she tries to stop the pain, someone is back for revenge.

This book was full of twists and turns in the plot when you were least expecting them. The way Stephenie Meyer describes Bella's pain is so realistic it makes you feel like you know her so well. The best part about this book was the fact it was from Bella's perspective when she going through all this pain and trying to make these decisions. It was perfectly paced for a book full of so much. The Preface at the beginning is gripping. It makes you have to continue reading so you can find out what happens to put Bella and Alice in this situation. The main factor that makes Twilight stories so realistic, is Bella's way of describing things, her emotions, feelings, decisions are exactly how any girl would deal with things(Maybe a bit more fear).

I have finished The Twilight Saga now! So all of the reviews are on the way! New Moon was my favourite-Team Jacob!!