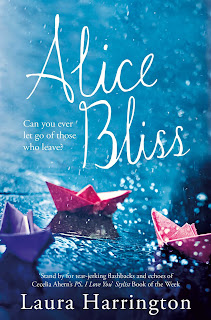 "Can you ever let go of those who leave?"

Alice Bliss, a fifteen year-old girl who is smart, funny and clear. She idolizes her father and tries to follow his example. But when her father decides to leave home to go to fight in a war, Alice is distraught. Her father has everything he needs here, a wife, his children, even his garden he puts every care into to. Alice has to try to continue without him around. Remembering what her father told her before he left, arguing constantly with her mum and throwing herself into school while waiting desperately for his phone calls, or his letters all while trying to stay strong for her younger sister. But when the letters suddenly stop, their worst nightmares come true. They are told he is missing in action, with no idea of whether he is dead or alive, how badly he is injured. Know they have to face up to the fact he may never return. But Alice refuses to believe he is dead and prepares for his return home-not mentioning falling in love with the boy next door.

Alice Bliss is a captivating coming-of-age novel that will have your eyes wide open to the consequences of war. Alice Bliss is brought to life in a powerful story full of love, loss and life. Told in Alice's perspective you can really get an insight into the life of a family when the father figure leaves for war. The pain, the uncertainties, each wrote into this emotionally honest journey of a young girl. Funny and packed full of the personality of a teenage-girl, it had me laughing throughout. 'Alice Bliss' brings to life a character that is relatable and who, every single young girl can find a bit of themselves in. A main part of this novel was the struggling relationship between mother and daughter. Alice doesn't look at her mum, the way she see's her father and feels like she can control things while he's gone. To make him proud. I loved following their story-just the two of them- as they attempt to make their relationship work.  'Alice Bliss' was also beautifully written with detailed flashbacks of Alice's life when she is thinking about her father. I was willing Alice on as she falls in love, finds out who she really is and grows up. The complicated life she has is full of hope, as I found myself with tears in my eyes, or excited about the chance of first-love.When I put this book down I found myself anticipating the fact of being young and being free. I adored this book, which I recommend to ages 12+.

'Alice Bliss was a captivating coming-of-age novel, that has your eyes open to the consequences of war for the families of the soldiers. Alice was a main-character every girl can relate to, in a novel full of life, loss and love: that will captivate you as she experiences first-love and grows up'
****
Posted by Unknown at 6:07 pm