Wear Your Geek Glasses with Pride 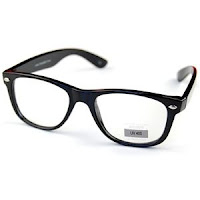 I am a Geek. I'll admit it. I like going to school and learning along with reading(a lot) and being on the internet. I can't help loving quotes and doing well. It's what makes me who I am. In this generation, people are bullied and name-called for being smart(or a Geek) but why? Although, things are looking up for us Geeks with the release of 'Geek Girl' by Holly Smale. Yet to be even published it's already making people feel proud to be Geeks and ignore those who decide we should be bullied or laughed at.

After reading Geek Girl, it gives you a different perspective on being a Geek. It's nothing to want to change but something to express and show(And not through wearing huge jumpers with GEEK printed across it). A Geek is something to celebrate. It's our interests. And it's a great thing to be smart because you have the privilege to learn more. And to be someone. Although, being a Geek isn't something to be singled out for bullying for. I speak from my own experience that working hard in school allows names to be thrown at you. Even when you answer a question or have your level called out and people groan.(It happened to one of my friends on Friday). It's really time that changed. And maybe Geek Girl is going to make sure being a Geek is something to be celebrated. There's nothing wrong with liking to learn or loving to read. I wish I had understood this all earlier. But, a Geek is nothing to be ashamed of. I'm proud of being one. So, we are not considered 'cool' but I'm OK with that. I'd prefer to be happy with a book in my hand or doing well in school than kissing more boys than I count and dressing in the shortest skirts I could find. 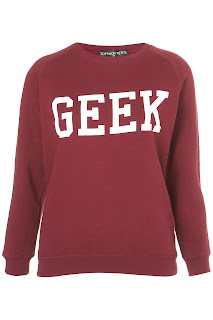 I was pointed out to the way people wear Geeky Glasses and jumpers saying Geek last week and how demeaning they are. It was a huge fashion trend last year, wearing huge glasses, so how is a Geek still un-cool? They laugh at us for a love of reading but then it's cool for them to wear jumpers stating that they are a GEEK?(Although, I can't help loving wearing the glasses myself) It's very stereo-type too, being a Geek. We all wear huge old fashioned glasses and spend all our spare time hiding away studying. Each and every one of us doesn't go out with friends but stays inside doing homework that hasn't been set yet.
I, just like a few others Bloggers received Geek Girl badges last week from Harper Collins. They are the cutest badges I have and something I have pride in wearing. It shows who you are without having to hide it. It's 2013 and people still can't be who they are in fear of not being able to fit in with the 'cool' people in school. But, it's time it all changed. A Geek being who is 'socially rejected' from the definition in a dictionary but why are we? There's no need to be rejected because we have knowledge. Personally myself, I'm no longer ashamed to be a Geek. I used to get upset about not being able to fit-in properly or being laughed at. I'll admit, I'll probably never stop being upset over what people say(Comments being 'You have no life' which I don't believe). It's time that being a Geek is celebrated and me and Lucy are already wearing our badges with pride.
Are you ashamed to be a Geek? Or do you think it's something to be proud of?
Are you wearing your Geek Glasses with Pride?
Posted by Unknown at 8:42 pm