"My Dad didn't leave me much, just the tools of his trade and a head for heights but he did teach me the different between right and wrong. He was very good at that. 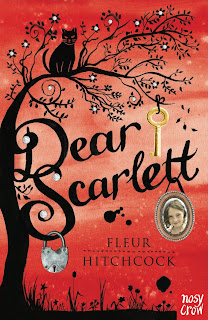 When Scarlett is given a box belonging to her father, the jewel-thief that has been dead for five years, she doesn't know what to expect. She finds it's full of clue's and maybe she can find out the truth about her father's mysterious life but only if she can work out what they all mean. Except people already have their perspectives, won't Scarlett follow in her father's footsteps? With her new friend Ellie she sets off on a trail that leads her into the life of someone she never knew at all. Was Scarlett's dad really a thief? Why did he tell her to 'keep looking up'? More so, what does it mean to be his daughter? And it looks like she is just about to find out, could she be risking more than she had thought?

Don't you just love this cover?

Dear Scarlett was a brilliant, exciting and quirky read. It has an engaging plot, with an interesting main-character that narrates the novel. The plot itself is mysterious, and despite being set for a younger audience, I feel this is a great read for people up to the ages of around twelve.

Scarlett was a witty, funny and courageous character. There are moments, on Scarlett's journey to discover who her dad really is, when you are laughing at the comments Scarlett makes or what she does. Scarlett has to deal with more than most ten-year-old girls but what you will notice throughout the book is that she grows. Through the novel she has to discover who she really is, in which you fid Scarlett is somebody who will fight for what she believes in, which really captures you on her journey. The other characters in this novel other than Scarlett, have their own personalities that are definitely stand-outs.

What I would say is some parts are realistic, despite being fiction. Being one of the strongest part of the book for humour. I felt that it could have been altered slightly. Apart from that, the plot was very mysterious. There is never one way the plot may go but it creates the perfect adventure novel.

There are some issue's in society that are talked about in this book. Subjects including bullying, stereo-typing and threat are in the plot and I feel they're important to be told. Stereo-typing plays a part in Scarlett's story, as she feels she should follow her Dad's footsteps as the people around her think she will.  The writing itself is funny, witty, smart and descriptive. It had a child-like quality to it but there were so many detailed descriptions and new idea's it was completely original.
I completely enjoyed this book and when I put it down, I wanted to read more about Scarlett's personality. She was fun to read about, and I think that is one of the best qualities to have in a book. Some scenes could be frightening for younger reads so I feel this is mainly for ages 10-12 but is the perfect relaxing read that you can just enjoy if you are 12-14. It definitely has it's laugh-out-loud moments!
Posted by Unknown at 9:00 pm