Review: Shadows of the Silver Screen by Christopher Edge

Shadows of the Silver Screen has been a review I have been trying to write for a few days now, but it's been difficult to choose a rating. 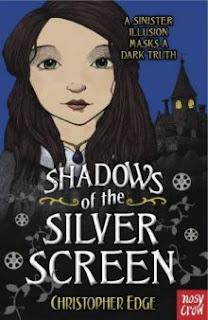 It's 1900. The era of the silent movie has begun and the silver screen is casting it's hypnotic shadows over audiences everywhere. Penelope Tredwell, thirteen-year-old owner of The Penny Dreadful and celebrated writer under the name of Montgomery Flinch, has had a film offer. The Daughter of Darkness, penned by 'Montgomery Flinch' is being optioned as a film and after seeing what the Veritescope can do, she can't wait to see one's of the magazine's spine-tingling tale of terror brought to life by the camera. When filming starts on a remote manor house on Dartmoor, everything goes well at dirst. But as fiction bleed into fact, the actors don't seem to be playing just parts any more. The characters have taken them over and the sinister story is becoming reality.

The end of the story is dark and dangerous. Is that how her own will end too?

In this second instalment of thirteen-year-old Penelope Tredwell's gothic London life, one of the stories she pens under the name of Montgomery Flinch is being brought to life on camera. I thought this was a great route to take the plot, Penny and the other main characters as well as some new additions forward and into yet another sinister tale. From the first page, you are taken to Victorian London with elegant descriptions and gothic writing. Christopher Edge is one of my personal favourite authors because of his rich writing. He pens his work so realistically and brings the 1900 streets of London to life. As well as creating daring characters and detailed descriptions from fairgrounds to Manor houses and an interesting new 'gadget'.

Penny Tredwell, our main protagonist here, is one of the most refreshing heroines that I have read about. She's not the likely heroine, she doesn't hold a bow and arrow or jump from trains, but I find her so relatable. Penny is wise, interesting and unflinching, as well as being completely loveable. The way she works is that she out-wits the villains and sometimes feisty personality definitely plays a part. Another personal favourite character is Alfie and I'm hoping, in another book, that this character will be explored more. As Penny's best friend, side-kick and close confidant, I'm really wondering where this relationship could go. There was also a third-person narrative which I think really fits this  novel. You could escape from Penny at times when filming in Dartmoor and cut to London, where a different part of the plot is playing out. Alfie is certainly the charming-prince!

When Penny and Monty, the actor hired to take on the role of Montgomery Flinch at public appearances arrive at the filming location, the whole plot takes a deadly side. With myths, ghosts and spirits, this book is a gripping read. The climax of the novel is fast-paced and exciting and there are also some suspenseful twists and turns in the plot that I really enjoyed getting through. I think the worst thing for a book is to be predictable, and there were no times where it let your hand slip from turning the pages.

After reading Twelve Minutes to Midnight, there were a few things that could have been better about the sequels plot. The writing will always have the highest of ratings but I felt the actual plot was confusing at times, and I found myself having to turn back the pages to see what had happened, to work out how the present had happened-and sadly I found that a pain as I love to be able to know everything.  There was quiet a huge cast of characters, and with ghosts and spine-tingling illusions, it could also be difficult to understand some parts of the book. I also felt the age on this book should be higher, definitely not a read for children. It's not too scary but there's a few scenes in there that have you looking over your shoulder!

For people who love historical fiction and exciting mysteries, this is one for you! For ages 12+.