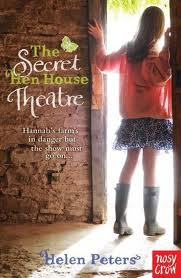 Since the death of Hannah's mum, her family has been a bit of a mess. Ger father works all day, everyday, on their farm that is falling-to pieces but only finds happiness in his animals. Hannah, has to try and get a long with her brothers and sisters, which are not the easier to be around, especially spiteful Martha. While everyone goes about their daily tasks on the farm, Hannah finds her mother's old Hen-House hidden away between bushes and thorns. Hannah has a passion for acting,just like her mum, so she decides to turn it into her very own theatre. Along with her loyal best friend Lottie, they enter the Linford Art Festival, using a play Hannah wrote herself. But, as a pair they are faced with problems and disasters like her siblings finding out their secret. One thing is for sure, dad can't find out or he will ruin everything. When the farm is threatened with demolition Hannah decides that she can save the farm, but who can she trust? And will she ever be able to make her plan work? All she knows is that the show must go on.

The Secret Hen House Theatre was heart-warming with beautifully written descriptions of the farm itself. The descriptions by Helen Peters made it so easy and clear to visualise what she was writing and give you a setting to the story. I could picture the farm and Hannah's house with the dust setting in the Living Room that is only used at Christmas. The characters throughout this story were quirky, funny and relatable. Hannah had such a clear passion for acting and a love for her mother. I loved the fact she 'liked' a boy in her class who was so sweet to her but included a lot of embarrassment and jealously on Hannah's part. Along, with the enemy your always competing with. Her friendship with Lottie was heart-warming because Lottie was so loyal. Everyone needs a friendship in which you know you can trust them with everything: even more than your family. Martha, Hannah's younger spiteful sister, I found intriguing. I think she had a very hard background behind her and had been effected most after her mother's death.

At times, this book was slow-paced with no excitement or events taking place: during the preparation for the play when they are designing costumes and scenery for example, I feel there could have been more happening overall. I found this annoying because I was enjoying the story. I think it is more for younger-readers but it was them few, slow chapters that let the book down for me. After thinking about giving up, I'm glad I decided to pursue.

It proved me wrong with an unpredictable and exciting build up to the end. Hannah, instead of being a girl trying to hide things from her father, became a fiery character who's passion to save the farm overpowered everything. All loose ends were fitted together with unsuspected twists in the plot. This book was emotional, through the fact Hannah's mother had sadly passed away, and I found myself feeling so much compassion for Hannah.

Rating: 3/5 - Just them few, slow chapters.
Recommended Age: 8+, possibly too young for me.

*Thank you to Nosy Crow for providing me with this ARC*
If you have read this, tell me what you think.
Posted by Unknown at 7:00 pm