This is a new feature I will be posting for the next few weeks about the latest popular features in Young Adult novels. This feature will discuss everything from swearing to adult content, and the types of characters you come across. Along with the discussion of dealing will illness in a novel. Latest success have provoked a huge amount of conversation on Twitter due to what is appearing in today's Young Adult novels. Swearing is a huge Don't for me in YA. I don't mind the odd word, but, I feel there is no need to have this type of language on every page.

In reality, swearing is something you can never seem to go a day without hearing. Personally, I try my hardest never to swear. The odd word may slip out but nothing offensive or hurtful, which I found has appeared in some books lately. Teenagers are known for being bad-mouthed and much more and in reality, many of us hate swearing. I wonder why people feel the need to use certain 'words' when truthfully, there is a much wider vocabulary out there to grasp. It feels unnecessary. Everytime I'm walking through the corridors or even scrolling through some of my feeds, I come across bad language. I don't know about you but, I hate to see it in books. I don't mind the occasional word, I sometimes feel it makes it more believable, but when it is filling most pages it makes me feel like making the book a DNF. 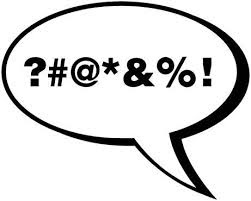 This discussion came into my mind after starting 'The Arrivals' by Melissa Marr. This is an adult novel so, it obviously has this rating for a reason. But, I was offered this for review and accepted it as the storyline itself sounded fantastic and truly is. This time, I can overlook the swearing as clearly it's an adult novel and has the right label but in YA it is one of my pet peeves when the storyline has everything but you find yourself reading swear words over and over again. I feel it can destroy fantastic literature - swearing never seems to fit.

Some people never seem to mind swearing - since it's a part of everyone's daily life - but I love it when I see an author has pulled off a book without bad language. Sometimes, there's a bit here and there and I find it funny. It can add some sarcasm, help emphasise a joke and I think it fits. Although, sometimes it's forgotten we are only teenagers. I'm only fourteen but have probably read books set for an age much older than I am and people argue we shouldn't be 'babied' - sometimes laying back with the language in YA is for the best. Then, I guess our thoughts began to wonder into how we feel about it being in adult books. In all honesty, I still think swearing has been stylised. People think it's 'cool' when those words appearing in every sentence isn't seen like that most of the time. The latest craze seems to be bad language but I think there should be a limit to the amount of swearing in YA. Who knows, maybe this will be a short-lived time but, for know, I feel like some of the best books out there have no bad language so why is so much of it appearing lately? Let's think: The Hunger Games, Divergent and Twilight - no bad language. Book lovers look for a stand-out story and writing to capture you - swearing is not something that is important. There are smaller instances of words some people don't like to see such as "hell" but personally, I don't see there is a problem with this.

Although, swearing is a stereotype for a romance novel bad-boy. Is swearing a way of creating a fab new love interest in moments? I will admit to loving 'The Knife of Never Letting Go' and 'The Fifth Wave' despite the swearing. Maybe it was the fact there wasn't too much.

What do you think?
Do you prefer the bad-boy look that comes with swearing?
How about the new GIFS?

Email ThisBlogThis!Share to TwitterShare to FacebookShare to Pinterest
Labels: Do's and Don'ts, Opinion