Leopold Blue was the first Contemporary novel I read this year, and it was very-different when compared to the books in this genre that I read in 2013. It dealt with politics, and other beliefs, as well as the equality between white and black people. 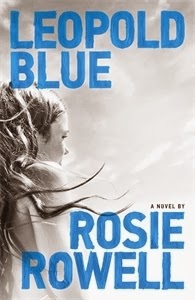 'No adventure or tragedy had come my way, nor ever would, not in Leopold...Despair hovered in doorways and oozed down telephone receivers. It formed a film over the eyes of those who had lived here forever, who would and could never leave. It was contagious...Without some miraculous intervention, I was in danger of getting stuck here, being me, for the rest of my life'
South Africa, 1993, and Meg is a restless fifteen-year-old in the midst of smothering social and political turmoil. When your own mother is campaigning to educate people on how not to die, your own personal anxieties are belittled. Your life made trivial.
Then Meg befriends Xanthe. Self-contained, rebellious and achingly cool Xanthe, and she begins to glimpse a life outside of her family. But by stepping away from her mother and into Xanthe's world, Meg is caught up in the chaos of adolescent longing and the pain of betrayal...And she soon realises that all that glitters is hardly ever gold.
Goodreads | Twitter | Publisher
'Leopold Blue' is set in a very important time in history; one that many young people are oblivious to, but should be reading about. This was a setting that was very prominent when reading Rosie Rowell's debut novel, especially after the recent death of Nelson Mandela, who was mentioned throughout the book. This was also a novel that not only tackled politics, and this was widely-discussed, but also the way that South Africa was changing during the 1990's and the belief that black people were not equal to those who were white began to end. Rowell writes this stylishly, perfectly capturing life in Leopold, a small-town that our main protagonist, fifteen year-old Meg, fears she will never be able to escape from.
Meg is a character that will be familiar to all teenagers who pick up this novel, if not for the fact she has to deal with peer-pressure in her attempt to finally keep the friend she finds, endless arguments with her parents who keep her from 'fitting-in' and the jealousy she feels for a boy called Simon, who's A Grades have meant she has always been compared to him. Meg, when we first meet her, has no friends. She's restless. In a town that runs deep with family-history and ties, with beliefs and traditions that have been there for what seems like forever, Meg's mum makes it difficult for the family to be a part of the community. This was also another aspect of the novel that was an interesting look at the difference between our times, and the 1990s. Her mum has a different-outlook on Leopold, and is trying to campaigning to help people with AIDS, a life-threatening disease but, the town dislikes her for it. Whilst reading, you wonder why Meg is so critical of her mum's choice to try and save lives, but shockingly, something like this separates them from the rest of town.
Xanthe is rebellious, outgoing and uncontrollable, and when she is seated beside Meg at school, after recently moving from Cape Town, its clear she is different from the other girls. Not scared of being the centre of attention, Xanthe is very much a force to contend with throughout this novel, and Rowell writes honestly about what it is like to show that you are 'cool' in front of your friends. We can all relate to the way Meg is desperate to keep the first friend she has had, and to follow-her into situations she would rather avoid.  There's peer-pressure, and the need to simply 'fit-in' when Meg is used to not doing so. From missing a school class, to taking drugs and drinking under-age, our main character is willing to go-against those that she loves, including her younger sister, Beth, to not feel lonely again.
There's jealousy, anger and upset; friendship, family and feuds. Rowell's debut is a coming-of-age novel that is all about finding-yourself and the pressures of being young. It does have some strong language, which does only make it more believable, and 'Leopold Blue' could have been made better by there being more of a background of life in South Africa, in 1993. The political-side of things is interesting and intriguing, but there were some parts I couldn't understand, as I have never looked at this period of history before. There's no doubt that other teenagers may feel this way. Some parts of this novel were slow-paced, but I could still relate to the characters throughout.
Posted by Unknown at 12:30 pm