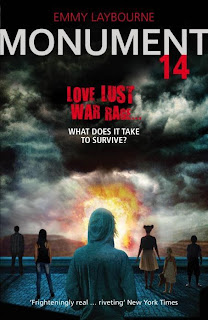 Synopsis: This is the story of what happens when 14 kids are trapped inside a superstore in the town of Monument. Inside, they have everything they could ever need, and with no adult supervision they can do whatever they want. Sounds like fun? It is. Until they find out that the world outside is being destroyed...

Goodreads | Twitter | Author Website
From the moment I picked up Monument 14 I was thrown into the world Emmy Laybourne has created. Set in the futuristic town of Monument, in Colorado, I was first introduced to the main protagonist Dean: whose day begins when he is almost late for the school bus that hurtles down the road. This is all too real for many readers: the hit-home of the school-morning rush to be on time and avoid being late.Monument 14 was fast-paced, action-packed and a thrilling dystopia. It was also a captivating novel that brought in a wide-range of topics while the actual setting was in one Department Store. When I first read the blurb, I knew I wanted to read this. The premise sets out an exciting plot that makes you wonder about the relationships inside this store and further than that, what is happening to the outside world. These characters are never frivolous: not for one moment do they just 'forget' about the terror outside of the doors.
There were twists in the plot, thrown-in surprises and always a question of whether or not to trust people. On that hand, the store was a brilliantly pieced together - I loved how well-described it was. But, the main thing was this book was a lot of fun to read too. I definitely enjoyed it!
Emmy Laybourne is so smart in the way she makes this book work. How are the characters able to discover what goes on outside? How do you differentiate between fourteen different kids? How do you make sure all their voices are heard when your only using one point of view? This sets out a challenging prospect for any author, but by using news broadcasts from the Media Department you are able to discover more about the outside world and as far as I know, she perfectly captured the teenage-esque feel of Dean's character. He was complicated, yet down-to-earth and relatable. Not only that but he made mistakes, fell in love and tried to protect those closest to him. Yes, there was love and lust but the perfect mix of rage and conflict. How could there not be conflict when you throw a group of kids with completely different personalities together, and force them to survive when the world they know has been destroyed?
There is a very wide and varied cast of characters in this book. To start there was Dean: whose point of view I found entertaining to read. It was the way the words flowed from the page, and his own love of writing that allowed me to just sink into the novel. You move onto his thirteen year-old brother Alex who I secretly adored. I liked his way of thinking, his ways of understanding the world using science and protecting himself. He never wanted to accept the truth, and I felt he was so relatable: facts make everything clear. These characters had backgrounds, and I really got to know them. I also got a great insight into Caroline and Henry's lives: as younger children you got a completely different perspective on the experience they were having. Six high-school kids surrounding them, looking after-them and without no parents: their bound is what kept them strong. One of the most powerful scenes came from them, when they decided to build their own 'den' and talk about their memories of their mother. You got to see what a child does, how they cope, which melted my heart. Niko: the survivor. The boy scout. He wanted to succeed and for the right reasons. He would do anything to protect this group and was the only one who could succeed in organisation.
I will always think Sahalia became a really important character. It showed the pressures on teenage girls to be noticed by the opposite sex. It showed how it is seen as important: that it makes you an adult. Although, I did feel minus a few characters I would have been able to connect more to the novel. Fourteen kids, how can you remember them all? I found some blurred together at times as there was a lot going on away from the characters. There were also some scenes where I found myself shocked at what the kids seemed to get themselves up to. But, let's admit it, boys will be boys.
4 Stars - Recommended for ages 12+
Upcoming Post: Catching Fire Trailer Talk
Posted by Unknown at 10:57 pm