This is a topic many of us as Teen Bloggers decide to avoid and I admit, I thought about this a lot before making the choice to write this post. Sex is a topic many of us seem to avoid in conversation as let's admit it: it makes everyone feel uncomfortable. I find, it's just as uncomfortable when that type of scene just appears in a book when it's un-needed. But, I guess if I'm writing this post it shows young people are mature enough to have some sex-content in their novels. But please, not too much detail!
I think the whole discussion surrounding 'explicit content' is the fact on whether we are too young to be introduced to what is seen to be an adult subject. Are we? I think in our society it shouldn't be sugar-coated, but it is. And it shouldn't be made glamorous, but it is. I mean, there's an image at the moment that you're not cool unless you have a boyfriend/girlfriend. Where did that come from?  The word 'sex' always seems to be whispered. Even when discussing this subject with fellow bloggers on twitter we used private messages. Although, isn't it important to show that sex can be talked about openly and through books, is there a chance that the number of teen pregnancies will be reduced? Books are talked about so, isn't it important that meaningful topics are put into them? 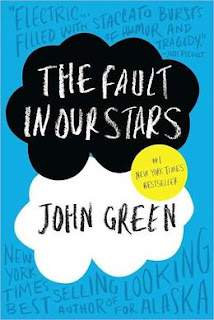 This argument could also highlight the amount of graphic violence we read. Isn't graphic violence an adult topic but something that is never simply avoided in novels? For some reason we can read books where people are constantly fighting - The Hunger Games is a great example, showing how popular it has become - but, when it comes to sex it has to be avoided?
Of course, I don't want to be reading detailed, over-the-top romantic gestures. I think Stephanie Meyer sets a great example when it comes to quite a 'rocky-terrain'. She gives us enough information for us to imply what is happening but doesn't go into the detail. That introduces us to this topic without making it partically glamorous and adding in humour when Edward's strength breaks the bed structure. This is what teenagers need. The fact that sex is not something to be avoided nor, glammed-up as let's face it: there is that pressure to have sex at a young age. I almost forgot to mention a small book known as 'The Fault in Our Stars' another book that I feel is the right way to handle this topic. It's there, but is written for our age. And this is still a fantastic novel.
As a YA Blogger, I've also been offered books from an adult genre to read where I have found explicit content with no warning. Although adult, should they're still be a warning showing that there is that type of content in the novel? In many ways, I think the fact it is an adult book could give you a hint to what is inside but, in a society where we seem to be hidden from so much, you never know what could make a novel adult. In my opinion an adult read could be something with: strong violence or language, extreme threat or explicit content. Especially when offering young bloggers the chance to read adult books, I think there should be a mention of what classifies them as adult. I recently picked up 'The Arrivals' by Melissa Marr where I found some really strong sex content which I was never told would be in the novel. I ended up skipping those pages, as in many ways, there are limits.
Then there is the small fact of adding warnings. Maybe that would be the right thing to do. A small label on the back reading, "Some sex content" as then when someone complains about the amount of explicit content in their YA novel, you can point out that they had a choice on whether or not to read it. Is this the right way to go? I hope it doesn't come to this but when offering adult review copies to YA bloggers, I think it would be a good idea.
Personally, I don't think sex should be avoided. Nor do I think we should be afraid of shouting out the 's' word for everyone to hear because, whenever sex is brought up everyone feels inclined to change the topic. At some point, we are going to be adults thrown out into the world and I'm sure everything will stop being glossed over then. There can clearly be too much detail as our ages definitely need to be taken into account. This also can't become a trend where every Young Adult romance contains it like recently love-triangles seem to be everywhere. As really, that just encourages things. But, publishers, don't be afraid to challenge us. Don't be afraid to write about the real-world, not all the time, but sometimes. We need that. We need reality.
Do you think there should be sex-content in YA? If so, how much?
Do you agree with me when I say we need it sometimes, just not all the time?

Thank you to Helen Douglas and all the bloggers on Twitter for helping me out when debating on whether or not to write this post!
Posted by Unknown at 10:21 pm